Tanen Jones is the author of the new novel The Better Liar. She lives in New York.

Q: How did you come up with your characters?

A: I had this thought: No one ever has perfect access to the interior conflicts of a family except the people in that family, but they never see the conflict clearly, being too close to it.

The only person who could ever truly understand a family, inside out, would be a person who somehow was allowed all the access of a family member while secretly being a stranger.

From that thought grew my characters. What kind of person would do such a thing? What kind of family would need "solving" in this way?

As I wrote them, I discovered my characters were cut along classic noir archetypes, but I had changed them to suit my own sensibilities: the detective was a young queer actress; the troubled marriage was an equitable one; the crooked cop was a butch woman; the dead girl speaks.

At the end, as in all the best noirs, each character is presented with a wrenching dilemma.

All novelists use old tools, but the hope is always to make something new with them. 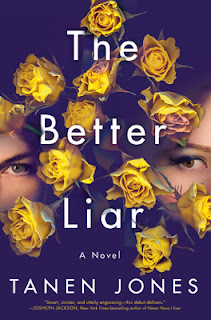 Q: You begin the novel with a poem by Louise Gluck. Why did you choose that particular poem, "Averno"?

A: Louise Gluck is one of my favorite writers. I was reading a lot of her poetry during the period when I came up with the book.

In her poems she often uses a well-known story, like a Greek myth, and twists it, adding new information each stanza that causes the reader to reevaluate the previous stanzas.

Her speakers are obsessed with the past and with time and truth: If I'd known that then, would I still have behaved the same? If I could go back, would I change anything?

"Averno" spoke to me because it suggested that the truth of a moment exists only in that moment, and can differ from different perspectives, an idea I wanted to explore in the novel.

I tried to structure The Better Liar so that each sequence offered new information, a new light in which to see the story. It twists in on itself with each further examination.

An interesting sidenote: I just learned recently that Louise Gluck is a big fan of crime fiction and that the burning field in "Averno" is a reference to a Henning Mankell novel. Now I carry a little kernel of hope in my heart that she will read TBL.

A: I knew from the start, yes. I like to have something to write toward, a big cathartic moment to reward myself with.

I made dozens of changes to the beginning and middle, and even to the people involved in the ending, but the bones of the story remained more or less the same throughout revisions. That ending kept me going through the more difficult parts of writing the book.

A: I hope it entertains them, first of all; I hope I earned their time and attention.

I hope it causes them to reflect on the issue described in the author's note at the end of the book, and offers them a new perspective on it, or maybe just the comfort of knowing others feel the same.

I hope it makes them want to buy more queer books.

And I hope they feel connected in some way. I felt disconnected when I wrote this book, angry and alone. I wrote it in part because I wanted to reach for people.

A: I'm really excited about my new project, but I can't tell you about it yet! It's another thriller, a new one, not a sequel, and it diverges from the themes I explore in The Better Liar in ways readers might not expect.

It's big and bold and twisty and it has required a ton of research so far, but I think it'll all be worth it.