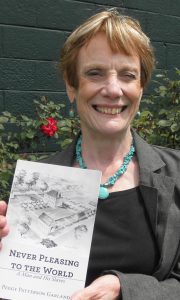 Peggy Patterson Garland is the author of the book Never Pleasing to the World: A Man and His Slaves, which focuses on the life of Robert Carter III, an 18th century plantation owner who emancipated 500 enslaved people. Garland is an attorney who served two terms as Commonwealth's Attorney in Virginia. She lives in Westmoreland County, Virginia.

Q: Why did you decide to focus your book on the life of Robert Carter III?

A: I admire him. He was a contemporary of Thomas Jefferson and George Washington and the two Lee brothers who signed the Declaration of Independence. Washington and the Lees were born in this same small county where Carter lived.

And yet, Carter has never gotten much credit for setting in motion the freeing of 500 slaves in 1791. He had an unusual relationship with his slaves. And they are interesting people in their own right. Carter was an intelligent, farsighted, and courageous man to do what he did in his society in his time. 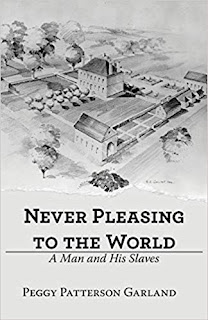 Q: Would you consider this book a novel or a blend of history and fiction?

A: It is a novel based on historical fact.

A: I researched by reading an incredible amount about the time in history and the places where Carter went. I also visited most of the places Carter went. I live in the county where his primary plantation was located and I know many descendants of his and of his enslaved people who live here today.

Colonial Williamsburg is an incredible treasure trove of information about Virginia in Colonial times and the people who lived and made history then and there.

I relied heavily on Carter’s letter books and writings and biographies of his contemporaries. A very important source was the doctoral thesis of John Randolph Barden done at Duke University, called “Flushed with Notions of Freedom, the Growth and Emancipation of a Virginia Slave Community.”

Q: What do you see as Robert Carter III's legacy today?

A: His manumission actually created a free black community which began in 1791 and which has continued into the present. I think his story is a part of the discussion of race which we are having in this country now.

A: I’m working on a memoir about my life as a female “come-here,” practicing law and running for elected office in a small rural county

A: The story of slavery in the United States is a lot more multi-faceted than most people realize.