Megan Angelo is the author of the new novel Followers. Her work has appeared in a variety of publications, including The New York Times and Glamour. She lives in Pennsylvania.

Q: How did you come up with the idea for Followers, and for your characters Orla, Floss, and Marlow?

A: The idea for Followers came about when I was writing in my journal, in cursive, and realized that my kids and grandkids probably won't be able to read my handwriting, since cursive isn't taught in schools anymore.

It felt like a very human way of thinking about the future, to me, kind of outside the sci-fi way we usually see the future treated in pop culture, and I thought it would be interesting to ground a whole book in that approach.

Q: You write, "I wanted to write something that would look at the future through a different lens than sci-fi or dystopia uses." How would you describe the lens you chose?

A: I know there are some dystopian ideas and some sci-fi features in this novel, but I was really trying to think and write in the style of a historical novel, where everything is character-driven and, despite whatever robots and drones and crazy geopolitical things come up, all the stakes really hang on the connections between the people in the book. 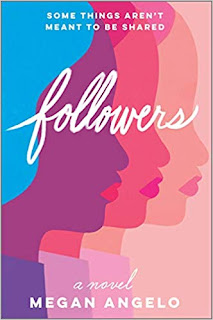 A: I originally called the book Cursive, when I started working on it.

I took a Catapult seminar with Rufi Thorpe where all of us students workshopped the first chapter of a novel, and at some point during that course I said to everyone: "I actually think I want to change the title to Followers—what do you guys think?" And everyone was like: well, obviously!

I'm so happy with it as a title because I think it communicates to the reader, immediately, that we're going to get into this weird, of-the-moment phenomenon of caring how many strangers on the Internet listen to us.

But what I love about it is that it speaks to the other kind of follower, the kind our mothers told us not to be. Everything that happens to Orla happens as a result of her being intoxicated by, and going along with, a friend who is not a good influence on her.

Q: You write that since the 2016 election, "I'd regularly come up with an idea and squint at it on the page, thinking, 'Can I get away with this?' only to walk into the next room and see something like it was happening." How much did current events influence your future world?

A: Let's just say that current events—cyberattacks, the dehumanization of immigrants, ramped-up hostilities with other countries—encouraged me to go with my imagination.

I really do feel like the past four years have been an exercise in turning on the news and feeling that there's no bottom to what can go on in America right now.

So many things that once seemed crazy beyond the norm have—just happened. Just happened, and we go on with our days, and like... the coffee machine still works and the schools are still open, as if all of this is normal, but it's not normal.

And I think it's important to remember that even when we feel that we can't do much to stop cruelty and ignorance and invasiveness on a large scale, we can choose every day to reject the sensation that it's normal. Sometimes that's all you can do, and it is meaningful.

So, while I'm not big on hoping that any reader takes anything specific from the book—at the end of the day, it's just a story, and I'm not pushing a message—I do think that if you're reading parts of the book and feeling that they're outrageous, just remember that they are a good 60 percent less outrageous than they were when I wrote them a few years ago.

And if there are things that don't seem that outrageous, ask yourself what you would have thought of them five years ago.

A: I'm working on two new books, and three small children, and it will probably be 10 years before I can tell how well any of them are going!

A: Yes! I am sick of talking about myself! So I'm going to take a second to recommend some new and upcoming books I love.

Tarryn Fisher's The Wives is a thriller that will gut you like a fish.

Kiley Reid's Such a Fun Age is one HUNDRED percent deserving of the amazing hype it's getting—I hid from my kids in a room with it for hours on end.

The characters in Gabriel Bump's Everywhere You Don't Belong are so vivid and alive, it's like you can hear all their hearts beating at once as soon as you open the book.

And Ada Calhoun's Why We Can't Sleep is a comfort, a call to action, a beautifully written and necessary validation of the female experience.