Jan Greenberg and Sandra Jordan are the authors of the children's picture book Two Brothers, Four Hands, which focuses on artists Alberto and Diego Giacometti. Their many other books include Meet Cindy Sherman and The Mad Potter.

Q: How did you come up with the idea for Two Brothers, Four Hands?

A: Two Brothers, Four Hands came about when we were visiting the National Gallery in D.C. to look at Lavender Mist by Jackson Pollock for our book Action Jackson.

The gallery with sculpture by Alberto Giacometti was astounding and we almost forgot our train was leaving sooner than later. It inspired us to write a book about Alberto and his brother Diego, who helped him with every sculpture he ever made.

Diego Giacometti was talented, as well,, creating “furniture so magical that one sees sculpture and forgets its function.” He always said, “Alberto is the artist. I am merely a craftsman.”

This feeling that he needed to help his brother, considered the genius in the family from boyhood, kept Diego busy until Alberto died. After that he began in earnest to work on his own art, handcrafted lamps, tables, and chairs adorned with charming little animals: birds, foxes, deer, cats and more. 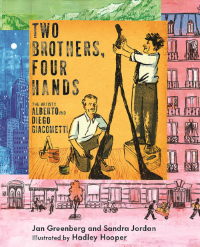 Q: What kind of research did you need to do on the Giacometti brothers, and did you learn anything especially surprising?

A: Along with visiting museums that exhibited Alberto's artwork, reading books about his work, as well as watching two wonderful videos, we also studied Diego's furniture, reading every source we could find and searching out the real thing in private collections and art galleries.

Many books were out of print but we tracked them down. James Lord's biography of Alberto Giacometti gave us a sense of the story in wonderful detail, especially the relationship between the brothers, each one very different in personality than the other. 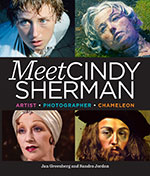 We love the writing process, the collaboration, but each of us also loves research.

A: We thought young readers, many of whom have siblings, would relate to the bond between the brothers, even the times when they disagreed.

Q: How would you describe the relationship between the brothers, and what would you say is their legacy today? 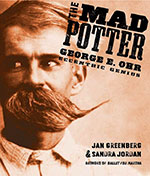 A: Alberto struggled for years trying to find the right direction for his work. Again and again he would whittle the plaster figures he created down to nothing.

He struggled with failure again and again but [persisted with] his passion for making art and his conviction to make it right, to make it the way he felt in his heart, despite rejection, the exasperation of those close to him, and years of living with very little money. “Try again. Fail again. Fail better,” said his friend, the playwright Samuel Beckett.

The subject of “failure” just might resonate with our readers. It certainly did with us. After years working in his studio day and night, Alberto finally was willing to exhibit his paintings and sculpture. Alberto Giacometti became one of the most important and revered artists of his generation.