Matthew Nino Azcuy is the author of the poetry collection My Castle. He lives in Olney, Maryland.

Q: Over how long a period did you write the poems in My Castle?

A: I wrote My Castle in September of 2017 while finishing up my associate’s degree at Montgomery College Maryland. It was a beautiful fall and I wanted to write something different than I had prior. I had independently published several works, which were very direct poetry.

My prior works did not leave anything to interpretation. With My Castle, I wanted each poem to be more subjective and universal, keeping an imaginative and fun universe within the book of poems. It took me about three to five months to get all the poems together, draft the manuscript, and revise the final version.

Q: The book is divided in two sections, The Castle and The Kingdom. What differentiates the two, and how did you choose the order in which the poems would appear? 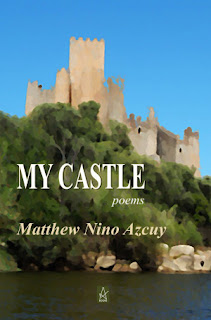 A: Exactly, so as you can tell the theme is sort of medieval in its essence, or at least that is what I was trying to convey. So, in The Castle, the main character’s forces are defending his castle which is under attack, while he as king hides in a dark corner during the bombardment and warfare.

Those chapters are representative of both his and my own fears that reign inside all of us. The doubt, the anxiety, the past trauma, the frustration, the heartbreak, etc.

The Kingdom is when his forces have successfully defended the castle and gained the upper hand and go on the offensive towards the enemy. That half of the book is representative of when self-discovery happens so that self-improvements may begin.

It shows that inner strength can bring outer triumph over life itself. The character masters his own fears with a cry of strength and wins over his fears and anxieties, though they will always remain.

The first half of the book is sad and depressing; the second is meant to be uplifting and triumphant.

A: Medieval for sure. I pictured a 1500s battleground and castle on a grassy plain. Motivational, spiritual, psychological, and a pinch of romance (just a pinch).

A: Rupi Kaur is probably my favorite contemporary writer. Mark Twain is fantastic. Robert Frost writes beautifully but is not my favorite. I also love and read a lot of religious texts and philosophical texts (The Torah, The Bible, & The Quran) and anthologies are great.

A: I’m working on two books. One is an action thriller novel, and the other is going to be a half-anthology half-poetry book.

A: Though we live in a seemingly dark time, there are so many resources to still put beauty out into the world. I hope that everyone harnesses their talents and strengths and puts beautiful things into the world, whether they be popular or not.

Poetry, Music, Nature, Friends, Family, Cities, Butterflies, Trees… if art reflects life, then it can used to reflect the light within it. Blessings and peace for everyone in our time. Thank you for having me!