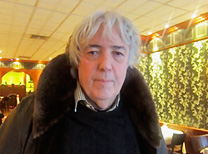 Robert Kalich is the author of the new novel David Lazar. His other books include The Handicapper, which also features his character David Lazar. Kalich and his twin brother, Richard Kalich, founded a film production company, The Kalich Organization. He lives in New York City and in North Salem, New York.

Q: You've written about your character David Lazar before--why did you return to him in this book?

A: When I penned The Handicapper I was in my early to mid-30s. It was a young man’s attempt at a serious undertaking. The book journeyed far from that. This weak author gave it to several editors and two publishers who were drooling for a moneymaker. I finished the book for Crown Publishers.

At that time the book was as “high-concept,” as much of a contrivance as several other bestsellers of the day. I became a celebrity. I had a bestseller. I was a hero to many. So, in my own way I became a “Donald.” I'd like to think that this novel David Lazar is written by a wiser man, an adult who has lived a full life and who hasn't prostituted the white pages he has typed on.

Q: The novel has been called "autofiction." How would you define that?

A: As autofiction, fiction and fact merged. What is the book? A book written by reaching into my inner life and leaning on my memory of how it was and exploding. Some truths are self-evident. Some are under the surface. 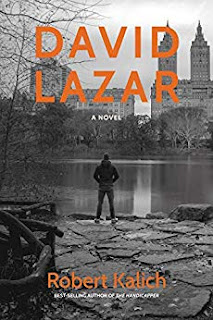 While writing many of these experiences, I was reaching into a place that is within and when they came to the surface I made sure they took up residence on the page. That's it, folks.

Q: Your twin brother also has a novel coming out this fall. Do the two of you discuss your books as you're working on them?

A: My identical twin, Richard Kalich, is a serious, somber, neurotic, brilliant writer, who thinks though each word and sentence and semi-colon as if his existence depended on it. He is definitely a serious man.

Dick would never let me near any of his magnificent novels while they were, or are, a work in progress. He will show me the finished product, but when it comes to my comments he usually thinks of my insights as if I were the wife of Trump.

A: I would say as much as they put into it. A cliche but so true. I'm not trying to preach, teach, or moralize. The story, my story, if anything reveals one man's fact that is one flawed and pathological man's journey through life. The fact that he landed on his feet is a miracle. Some of us besides that guy in the White House got lucky in their lifetime. I landed on my feel. Tell me why?

A: I'm being stirred to do something with the polarities we suffer from. Racism, religion, nationality, or whatever else stirs our insecurities. I've always believed that once you scratch the human surface the one thing that bleeds out is irrationality, absurdity, terror, bigotry, and the kind of rage that turns us into beasts.

A: The novel that I've written says a hell of a lot about myself and David Lazar. Our life, our humanity, our difficulties, our flaws, and above all for me how fortunate I've been. Especially these last 20 years. What else can I say.

Every time I read a newspaper or listen to the media report on the state of the human condition or spend time with just about anyone, I can see, feel, and experience Sartre's Nausea. To live on our atlas, absorb it, take it seriously, to swim upstream all the time ... wow ... what a life. And that's why we are providing and sustaining and applauding.

Maybe Rodney Parker or another friend of mine said it all with this clarion call: "There ain't no hope." But I think there is.

So, let me qualify. One good deed each day. One kindness. One pure thought with generosity of spirit. One and then two, and then many more and I'm convinced that mankind is a brotherhood. But I'm beginning to talk too much. Figure it out for yourself. As I tell my son, Knute, "Think for yourself. Stand on your own two feet. Never pull punches. Hold on to your sense of self."