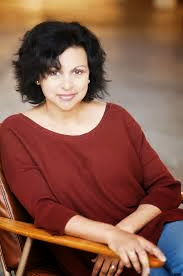 Nina Mukerjee Furstenau is the author of Biting through the Skin: An Indian Kitchen in America's Heartland, and Savor Missouri: River Hill Country Food and Wine. She teaches food and wine writing at the University of Missouri's Science and Agriculture Journalism Program and Journalism School. She is based in Fayette, Missouri.

Q: How did food become the way to explore and maintain a connection to India as you were growing up in Kansas?

A: It was interesting to be of two cultures while growing up. Outside our front door, I was a Kansas girl, experiencing girlhood like all my friends: riding my bike, eating ice cream sandwiches, roller skating and playing softball.

But Pittsburg, Kansas, with its own rich story of assimilation had no particular interest in differences. So it was behind our front door that India surfaced, especially around the dinner table. The foods my mother prepared, the spices she used and how she used them all spoke of a culture that I craved to know. So I paid attention and learned from her, and from my father.

During cool, wet days, he would feel the need for a Bengali comfort food, kichuri, a dish of lentils and rice, typically made in the wet months of monsoon when the rivers of Bengal would be swollen. In my childhood, I didn’t think of kichuri as a clue to my heritage, just that it was warm and rich and tasty. But, now it, and other dishes my mother created in the flatlands of Kansas, turns out to be the part of Indian culture I carry with me.

Q: Did you need to do research to recreate some of your experiences, or did you remember most of it without any research?

A: I think memory unfolds as you begin to focus on what makes you who you are—Biting Though the Skin started with the realization that I took the same four or five basic Indian recipes with me to the Peace Corps in 1984 that my mother wrote frantic letters to my grandmother for in 1960 when she left her Indian home for Thailand as a new bride.

After that initial memory surfaced, I talked with my mother about her experiences of leaving home and about how our two totally different childhoods could produce the same set of recipe cards. The best part of writing this book for me was the discussions I had with my family as memories surfaced.

Q: How did you pick the recipes to include in the book?

A: I chose recipes that were part of the narrative scene. As with most books, I was looking for what moved the story forward, what scenes revealed the theme I was trying to convey. The foods that were a part of that movement were chosen to be part of the fifty-six family recipes included.

Q: You also have another book out this year, Savor Missouri. How did this book come about?

A: I feel food has story and regional food can reveal a lot about particular soils, settlement, and culture of an area. I teach food writing in the Science and Agricultural Journalism program at MU and in the course of my work, I came across so many interesting people raising foods and making wines and producing cheeses and sausages that reflected the settlement of our region.

I find it fascinating how those food choices reflect the settlement of people from far away cultures that somehow made their food story come alive again in a new place. The pieces of their original food story that made the transition were the ones that fit the landscape, the soils and weather of this place.

I was drawn to writing about this, even though I am not from an agricultural family, because of how it seems to mirror my own family’s connection to the fruit of their homeland and what we tried to recreate in our Kansas kitchen.

A: I am writing a novel at the moment that incorporates two cultures—Missouri and Africa. Since it’s early days on that project, I can’t say yet how large a role food story will play, but you can be sure some of that interest will show.