Mark Russ Federman is the author of Russ & Daughters: Reflections and Recipes from the House that Herring Built. He is the grandson of the founder of the famous store on New York's Lower East Side, and ran the store for more than three decades before handing it over to his daughter and his nephew in 2009.

Q: Do you still go into the store?

A: Of course. I’ve been a fixture behind the counter. You get a persona based on what you do. I was “Mr. Russ.” The original Mr. Russ was my grandfather, but I became Mr. Russ.

What should I do in my retirement? I was around great people and great food—I was back at Russ and Daughters on the customer side of the counter. It was a great place to retire. Now I watch the next generation. I consider that success.

A: I became my persona, Mr. Russ behind the counter. It’s somewhat infectious; it stays with you. People came in the store; it feeds your narcissism. I did that for thirty-some-odd years. I was Mr. Russ, the center of attention; the whole universe revolved around me. The whole world comes there.

I was a lawyer. You leave it and say, Thank goodness, free at last. What do I do? I’ll write a book about the place. I’ll spend the rest of my life doing it. Plenty of writers come into the store. As a group, they all seemed fairly relaxed. Some even come in in their pajamas. I said, I can do this! I was ultimately to discover that it was harder than retail. Who knew? Then somebody said, Hey, Mark, you need an agent. I put out the word, and now all these agents were coming around. Because it turns out that everything is a business, and I had a platform, a place to sell books, on my counter, on top of the herring. …

So I wrote the book, and it took me three years. The deadlines forced me to do the book. After 100 times of reviewing the book, by the 100th time, it’s nauseating. In the beginning when I put it down on paper, I’m in love with it. Then, the job of editing—I have a tendency to rattle on—the job was to make it somewhat readable and not 37 volumes.

By the 100th time of reviewing it, after the deadline, [I’m thinking], This is the worst piece of crap that has ever crossed the page! God forbid the Russ family ever reads it! That was my fear, even though the agent said, I love it!

Then I was praying—I’m not a man given to prayer—that nobody reviews this book. Then Dwight Garner [from The New York Times]—he’s not even a Jew—says he loves it. [And after other positive reviews], to this day, I have no idea why this book I wrote to get out of the way of the next generation and let them sell lox in peace…It’s a good feeling for me.

Q: Your book is very funny. Did you know going into the writing that it would end up with a lot of humor?

A: That’s me. It takes a while to get the voice down on paper. If I were waiting on you and all you wanted was a bagel, that would take 45 minutes. I would be interrogating you on your life. That’s what I did. The idea was to get that sort of schmooze down on the paper. At the same time, I wanted people to know that I know my business.

Q: What does your family think of the book?

A: This is in March when the book comes out. I’m in Florida, visiting my mother, the youngest of the Russ daughters, age 92, and my aunt, the oldest, age 100.

The book comes in to Random House, and they send the first two books to my mother and my aunt. I’m watching as they open it. I’m thinking, I know what they’re going to say. I started running things by [my mother when I was writing the book, and she would say], “Why’d you have to say that for? That never happened!” 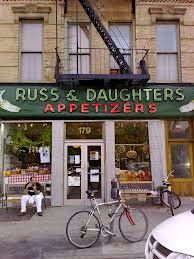 Both of them were totally delighted by the book! It’s their story and they like the way it’s told. It gives them kuved, some honor, for all those years they worked and didn’t get it. It wasn’t celebrated. From the time they were young girls, they worked hard.

The book is dedicated to them; it’s probably the best piece of writing [in the book]: “To Hattie, Ida, and Anne—the Russ Daughters. Without them, there would be no store and no stories.”

[The book] turns out to have been medicine or a life extender. They hung in there until the book was out, and their friends were calling them. Now they know I go around the country talking, and they want to hear what the events were like. How good is that!

A: It turns out we were Hasidim on the other side. I’m basically a secular Jew. I go to temple on the High Holy Days. But we were Hasidim. Grandpa Russ was a Hasid in the old country…when [he] came here, he left it at Ellis Island….

A: In the beginning I didn’t believe I turned out one book! But since this book has been so well received, you get that bug. The question is, what would that book be about?

--Interview with Deborah Kalb. This interview was conducted in conjunction with The Lessans Family Annual Book Festival at the JCC of Greater Washington. Mark Russ Federman will be speaking at the festival on Sunday, November 10, at 9:30am.
Posted by Deborah Kalb at 12:37 PM