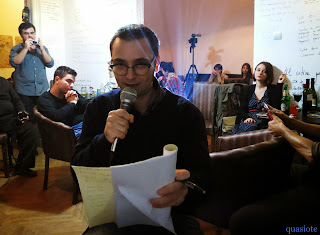 Razvan Tupa's poetry collections include Fetish and Romanian Bodies. He has worked as a journalist, and has edited the magazines Versus-Verso and Cuvantul. He is based in Bucharest, Romania.

Q: What are some of the themes that you explore in your poetry?

A: Whenever I have to explain my poetry, I find it hard to choose one of the reasons which highlighted poetic expression as a viable tool for me.

I can think of childhood memories, when poetry meant a happy moment in my family life in Romania. I can also pick moments when I simply wished to practice expressions, as a late teenager of a soccer fan group. And then, I still consider very important the fact that each important job I've had was somehow connected to poetry.

I've always been interested in structuring my poetry, after having written it. Every time I prepare myself for a reading, I try to keep only the texts that can be relevant for the audience I am to meet. In order to do this, I keep searching a bit through the poetry that shaped certain expectation in the audience.

But what really surprised me was some particular kind of recurrence of the main themes that I'm interested to approach in front of the reader. One of these themes is identity. I am also interested in investigating devices and myths that we can use in order to acquire a sense of our daily endeavors.

Q: How differently do you think people experience your poems when they see or hear you read the poems out loud as opposed to when a reader sees them only in writing?

A: Well, I envy the writers who can say they know everything about their readers. As for me, I'm more interested in offering both the readers and the audience opportunities to involve themselves in a poetic experience.

Both writing and reading out loud are just some of the tools I use. I know for a fact how important were to me the lectured or audible texts written by Pasolini or Ashbery, as well as the Surrealist poetry of Gellu Naum or Gherasim Luca, or the expression of full revolt signed by Tristan Tzara. 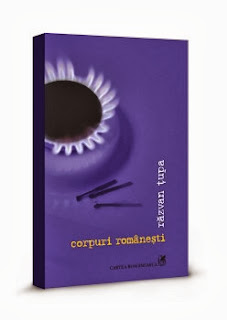 Actually, the difference of media in communicating poetry is relevant only for our habits. Most of what we think about ourselves are habits, of course. But, essentially, poetry has had the opportunity of plural media always. Some poems were performed, others read or sung. Some still are. Maybe this refusal of unique physical support for it was some kind of a chance for poetry.

Q: You've produced a film that features young Romanian poets. How did you select the poets who would appear in the film?

A: The film "poetry. the power" was just another exercise for different media with poetry. I intended to show on film the young  poets who were not too popular at that moment.

The Writers' Union was trying to convince young authors to become members of their association, but the institution was not too successful in their attempt. The most famous organization for writers in Romania did not have any programs to support emerging writers, being limited to offering awards.

They organized this colloquium for emerging writers who were not members of the Union, yet. I think it was the second or the third time they were doing that when I asked permission to film some participants for an independent feature.

I've made my own selection, from the participants at the event of the Union. It goes without saying, I filmed the best and the worst of what could be heard at that time with new poets in Romania. It was not an exhaustive list, but it is still representative.

Q: You have written on your blog about Romanian literature. Who are some Romanian authors that you would particularly recommend? 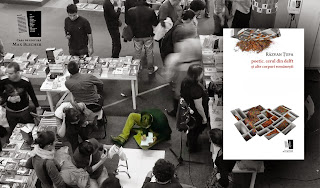 A: Just these days you have in North America a tour of one of the most influential contemporary Romanian authors. Mircea Cărtărescu launched here the American edition of his trilogy, called Blinding.…

The Romanian poetry in America has mainly been connected to one man for a long time.

The Vanishing Point That Whistles: An Anthology of Contemporary Romanian Poetry was published two years ago by Talisman press. Mr. Sorkin edited this anthology together with Paul Doru Mugur and Claudia Serea.

Just half a year ago, the poet Martin Woodside translated another selection of Romanian poetry. I know that in Chicago, the poet Gene Tanta is revising now a new anthology aimed to cover the last 20 years of poetry in Romania.

I am more focused on the thin line that connects poetry which is written as an expressive exercise and, sometimes, the desperate attempts to escape formulas that do not express our own fears and fascinations.

Actually, there are also Romanian authors living in the United States. Andrei Codrescu is pretty well known, and in New York you can find drama written by Saviana Stanescu, or performances by Romanian poet Valery Oisteanu. We have now a very strong presence of Romanian language writers from Basarabia, or Moldavia, as the country is now officially called.

There are writers such as Claudiu Komartin from Bucharest that even used as an experiment in their poetry explicit influences that are connected with Moldavian contemporary discourse.

A: I was very glad to have been selected by OMI for the Ledig House residency this fall, with the support of the Romanian Cultural Institute in New York (RCINY) in order to write an essay on Poetics of Relations, as developed since Edouard Glissant set the basis of the poetry which is trying to escape the stereotypes stuck with poetry since Romanticism.

I also have a series of poems that I have started to develop this year, inspired by Constantin Brâncuși, the seminal Romanian modern artist, who became famous in New York in the ‘20s. At that point, his aesthetics was brought to trial in order to legally establish if modern art was Art, or Industry.

I've passed one week here, at Ledig House, and the writers I've met here are extraordinary. They have proved very supportive, not only in daily activities, but also as I am keeping an eye on the "Save Roșia Montană" protests in Romania, against cyanide use in gold mining and against fracking.

A: I will be in New York City by the end of my residency at OMI. I will be reading my poetry from the "Romanian Bodies" series at Bowery poetry club, on November 4 at 9pm for an entire evening sponsored by RCINY. The next day, RCINY will be hosting talks and presentations on the topic of contemporary poetry.