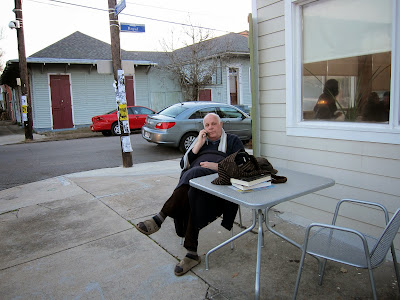 Frank de Caro's books include Stories of Our Lives: Memory, History, Narrative; Folklore Recycled: Old Traditions in New Contexts; and An Anthology of American Folktales and Legends. He is a folklorist and a professor emeritus of English at Louisiana State University, and he lives in New Orleans.

Q: You write that Stories of Our Lives is a "memoir with a difference." Why did you decide to blend more traditional aspects of a memoir with stories and oral narratives?

A: Actually I was asked to contribute to a book by a folklore grad student who wanted pieces that blended the personal with folkloric interests. So I came up with what was sort of the first chapter of the book.

The grad student’s book project never came to fruition (I think she wandered off from grad school and started a bakery), but the idea of such a blend stayed with me (plus I had what I had written for the book and didn’t want to just stick it in a drawer).

So I decided to expand the piece into the book. In doing that I was partly thinking how amateur genealogists (genealogy is said to be the most popular indoor American hobby) gave so much attention to their efforts and so often came up with just a few bare facts like dates and how they could expand their efforts by recording family and personal stories. And I was partly thinking of how important a role stories play in preserving family and personal memory.

I wanted to write a memoir (don’t we all want to record something of what we’ve done, even if it’s not earth-shattering?) and thought that as a folklorist (folklorists are very interested in the stories we all tell) I should do that by trying to call attention to the role of oral narratives in constructing and reconstructing our pasts.

Q: Was there anything that particularly surprised you as you examined your family’s past?

A: Not the family narrative; that was in my head and I just had to bring it out.

But I was surprised at how much documentation to supplement the stories I could put my hand on. I had letters my father had written my mother in the 1930s, postcards she’d sent back from Europe in 1926, and–most of all–I had a wealth of old photographs from the late 19th century to the 1930s that I could not only use a few of in the book but could use to get a sort of visual fix on the times I was writing about.

Q: Why did you decide to title the book "Stories of Our Lives"?

A: Well, it’s about stories in the sense that I’m trying to call attention to the role of oral narratives. And I felt that it was about more than me and that other people’s stories had obviously influenced me. 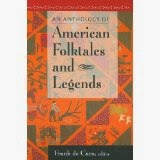 So it wasn’t just my stories but "our" stories and not just my life but the lives of others whom I’ve interacted with as well.

And I hoped that readers might see a model for coming to terms with their own stories, hence "our" stories.

Q: Your last chapter deals with Hurricane Katrina. What impact did that have on your life, and why did you choose it as the subject of the last chapter of the book?

A: It’s the last chapter because it’s the last major event in my life. As for its impact, I think that even all these years later people in New Orleans are still trying to figure out the impact of that event.

In some ways its impact on me was not major. I was in exile from my home for over two months, but my part of town (the historic Garden District) did not flood (the older parts of town are evidently on "high ground," though to look at it, the whole city seems equally flat to me; obviously there are significant gradations) and snapped back to "normal" very fast. 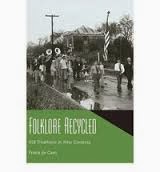 Though there are parts of town not far away that still look devastated, we have a place that looks pretty much as it used to before Katrina, with functioning businesses, people wandering the streets, tourists still coming to check us out.

In other ways, the impact has to have been great. I know that I’m living in a place that’s not the same place it used to be (thousands of citizens didn’t make it back from wherever they were sent; areas like the Lower Ninth Ward, once full of life, have acres of open, vacant land where houses once stood).

I think we’re all waiting to see what happens now, how this place will continue to develop or if it will.

A: I’m trying to do a book on what American folklorists have done in and for America. It won’t be for folklore scholars or students but rather for a general reading audience.

I think that folklorists have done amazing things for American culture, especially in establishing the "roots" cultures that make us up and that everybody should know about this.