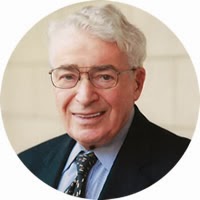 Alan L. Wurtzel is the author of Good to Great to Gone: The 60 Year Rise and Fall of Circuit City. He is the former CEO of Circuit City Stores, a company originally founded by his father, Sam Wurtzel, and also served as chairman and vice-chairman of the board. He is a trustee of The Phillips Collection, the Chesapeake Bay Foundation, and Oberlin College. He lives in Washington, D.C., and Delaplane, Virginia.

Q: Why did you decide to write a book about Circuit City?

A: There were a lot of reasons. First was that I knew about it since I was a child. I had been out of management and off the board for nine years. I was curious—when I left, it had been a decent company and was doing well. I never thought it would die. Second, I owed it to friends and associates who had committed their lives to Circuit City, to let them have an intelligent understanding [of what happened]. Third, I had never written a book, and it was a challenge.

Q: Was it difficult to write objectively about your father’s and your own business decisions?

A: Yes and no. I said some things that were not flattering about people, including my father. I didn’t want to write a vanity book. I wanted to write a more honest book. It wasn’t always fun, but the overall goal was worth the pain.

A number of fellow board members said, “Don’t write this book.” …My successor was a good guy, but he made some mistakes. This is a public company, and you put yourself out there for the world to evaluate. That’s how I talked myself into it. I didn’t go out to hurt anybody’s reputation, but to tell the story as honestly as I could. 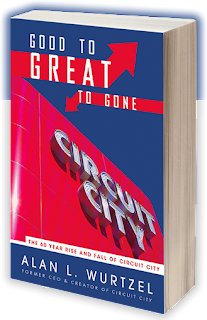 Q: Why did you title the book "Good to Great to Gone"?

Q: What are some lessons for other companies in Circuit City’s fate?

A: This is a book about business strategy—the art and science of aligning external forces with internal [opportunities]. As a CEO, if you can’t control them, you can influence them, and bring them in harmony to make a profit or deliver a service.

Q: How much did you remember from earlier days as you were writing the book, and how did you research the book?

A: We moved to Richmond and my father started the company when I was 16 years old. I was in high school for a couple of years, college, and law school. I had an adult’s view of what was happening. With a little research, talking to people, I had little difficulty putting it together.

The part I had to research was 2000 to the end. I was not on the board, and many people I knew [were no longer with the company]. I did 40-some interviews, in-depth interviews, I read a lot, annual reports, company reports, trade magazines and SEC filings. I needed to do that to reconstruct the last nine years. I spent three years writing the book.

Q: What is the reaction to the book from Circuit City employees from before and after you were involved with the company?

A: Whether they liked it or not, there is gratitude that there is a comprehensive explanation of the company. Having it all together in an organized way is universally appreciated.

Q: How did you find all the photos that appear in the book?

A: I had a guy who helped me who used to work for Circuit City. His job was sales training, and he had hundreds of photos. Also I used scrapbooks that I saved from before the company went under. A variety of sources.

A: The key takeaway from this: Hubris is the enemy of success in almost anything. Curiosity is an essential ingredient of success. Habits of mind are useful traits in approaching business strategies.

--Interview with Deborah Kalb. This interview was conducted in conjunction with The Lessans Family Annual Book Festival at The JCC of Greater Washington. Alan Wurtzel will be speaking at the festival on Tuesday, November 12, at 7pm.
Posted by Deborah Kalb at 4:22 AM