Tracy Guzeman is the author of the new novel The Gravity of Birds. She has written for Gulf Coast, Vestal Review, and Glimmer Train Stories. She lives in the San Francisco Bay area.

Q: How did you come up with the concept for The Gravity of Birds?

A: The Gravity of Birds started out as two short stories I couldn’t finish. The first was a story about two sisters whose relationship changes when one is forced to assume the role of caregiver for the other. I wanted to explore how that shift would impact the dynamic between them.

The second story involved a young man, recently graduated with a degree in the arts, who finds he is flailing in the working world. Instead of the meteoric rise he’d anticipated, his career is on a downward trajectory. What would that feel like, at a time when most of his peers were experiencing success?

I really cared about the characters in both stories. Even though I couldn’t find appropriate endings, I didn’t want to abandon them, so I set the stories aside, periodically dragging them out to try again.

One of these repeated attempts happened to coincide with a move, and while I was wrapping up an old portrait—an oil painting of my great, great, great grandmother and her two daughters—I recognized that those two daughters were also sisters.

Why I’d been oblivious to their relationship as siblings up to that point, I don’t know, but once I saw them in that light, I wondered if they might be the two sisters in one of my stories. The painting worked its way into the other story, as the object with the potential to turn things around for the young man.

It was then I saw there might be a connection between the two. Once I realized that, the idea for the novel seemed to come together, although all of the characters are fairly different than they were initially.

Q: The dynamic between Natalie and Alice is very complicated. What about the relationship between sisters intrigues you?

A: It happens to be sisters in this case, but I think everything about family relationships intrigues me. There is this idea of what families should be like, and then there’s the reality: sibling rivalry, jealousy, shared history, competition for favor, deep love, resentment, protection, sacrifice, family tradition, responsibility, pride, loyalty, family secrets, the things we inherit, the things we carry—it’s such fertile ground for fiction! 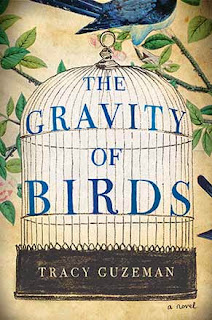 Natalie and Alice have a very twisted, co-dependent relationship. The fact that they stay together is the thing I find most interesting. As Alice says at one point about her relationship with Natalie, “…we turned into each other’s best excuse for not doing the things we were afraid of.”

Q: Why did you pick birds as a theme, and "The Gravity of Birds" for your title?

A: I majored in landscape architecture in college, and even though the character of Alice isn’t based on me, or on anyone I know, I thought from the beginning that she would be someone with a close connection to the physical world; it’s the vocabulary of details I’ve always been comfortable with. I’m fascinated by birds, so for her to be an ornithologist seemed a good choice.

As far as the title, I had originally thought the novel would be called "Triptych," but that was vetoed by my agent, who suggested I come up with something else. So I sat down with pen and paper and started writing out possibilities.

Because Alice is a central character, I was leaning toward something with birds. There was also this idea of the freedom of flight compared to Alice’s physical state, in which her movements, as well as her ability to move through the world, are both restricted.

Q: Do you have a favorite among your characters?

A: That’s like asking me to pick a favorite child! If I base my answer on who I miss the most, it would probably have to be Stephen and Finch. I miss their camaraderie, and their interchanges—the way they bounced off each other. Even though I’m happy with the way I left all of the characters, I do sometimes catch myself wondering what the two of them are up to.

A: I’m moving back and forth between three projects right now, which is certainly not an efficient way to write. But I have these ideas all poking me in the brain, and I know one of them is about to strong arm the other two, and move to the front of the line. I can tell you that the next novel will be set on an island off the coast of the Pacific Northwest, or in the Soviet Union, or in China. (Or maybe all three.)

A: I’ve been overwhelmed by people’s kindness in taking the time to write and let me know how much they enjoyed the book. I wrote The Gravity of Birds in something of a vacuum, without much thought as to what would happen once it was out in the world. (I didn’t stop to consider that at some point, it might actually be read by people who weren’t related to me!)

It’s been an amazing experience, and I’m grateful to all of those who have gotten in touch with a question or a comment, or with their own story to share. My sincere thanks.