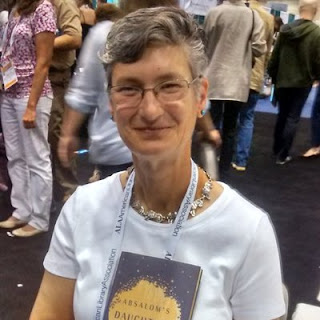 Suzanne Feldman is the author of the novel Absalom's Daughters. A former art teacher, she is based in Frederick, Maryland.

Q: How did you come up with the idea for Absalom's Daughters, and for your characters Cassie and Judith?

A: First, just a brief synopsis of the story… It’s about two girls who grow up, very poor, in southern Mississippi in the 1950s. One’s black and one’s white, but they’re half-sisters and have the same white father.

He’s a philanderer and he finds out about a family fortune in Virginia and leaves (both) his families to go get it. The girls decide they’re going to get their due and go after him. All they have is a stolen junky car, a ham, and a few dollars stuffed into a shoe, but they’re determined.

I came up with the idea after reading Faulkner’s Absalom, Absalom! for the first time in grad school. I fell in love with Faulkner’s work, but it seemed to me that all the women—black or white—were just wallpaper in this book, so I decided to write about Faulkner’s women.

For those who may have read Faulkner in college but have forgotten the plot, Absalom, Absalom! is about a white man, William Sutpen, who comes from terrible poverty and tries to build a dynasty and legacy on the backs of his slaves and his women.

And he almost succeeds except that he has two families—one black and one white. When the black son—and he’s only black because he has “one drop of black blood” in him—tries to marry the white daughter, the whole house of cards comes crashing down. 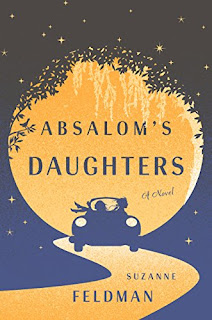 In Absalom, Absalom! Sutpen rapes his slave women and has a black daughter named Cassie. He also has a white daughter by his wife, named Judith. I wanted to tell the stories of the descendants of those girls, so I gave them histories, and names handed down from one generation to the next until I got to the ‘50s.

A: I have a shelf full of books for the research I did for this book—everything from Toni Morrison’s work—The Bluest Eye, for example—to a book about what kind of music you could hear on the radio in those days. I read a LOT of literary criticism on both Morrison and Faulkner, including an essay Morrison wrote on Faulkner.

Zora Neale Hurston was my go-to source for dialect. She was an African American anthropologist in the ‘20s and ‘30s. She was a bit of a road-tripper herself and would travel around Southern Florida in her little Chevy, with a pearl-handled revolver in her purse.

She was collecting African American folktales in small towns and turpentine camps and juke joints—not like the Uncle Remus folktales which are reserved for white people, but the tales black people told each other on their front porches. She wrote down the words exactly as they were spoken and preserved accents and dialects and folk tales from all over the South.

Toni Morrison’s Beloved was also a big help with dialect.

I’m not sure anything particularly surprised me, but for me, Toni Morrison’s work just becomes more impressive with each successive reading.

Q: As you’ve noted, the book is set in the Deep South in the 1950s. How important is setting to you in your writing?

A: I think this story depends on its setting, and really couldn’t have taken place anywhere else.

The South in the ‘50s was a place of great turbulence, racial and economic. My mother grew up in the South during the Depression, and it seemed to me that there wasn’t a lot of change in some areas, even into the ‘50s. Poor people had no hope for the future. The only option was to get out and pursue your dreams with hard work and no guarantees.

But aside from the problems with being poor, the South is full of folklore and myth and history, like the Brer Rabbit tales, and so on.

I went to Alabama to visit one of the landmarks that my characters find—the monument to the Boll Weevil in Enterprise, Alabama, so I went on a road trip myself. It was a really rural part of the state and when I got lost (and I always get lost), I had to stop at a convenience store/gas station and ask directions.

I was no more than 10 miles from where I needed to be, but the people there couldn’t tell me how to get there—so in a way, these little rural towns are still as isolated as they were back in the ‘50s, or even earlier.

Q: The Kirkus Review of the book compared it to the work of William Faulkner and Toni Morrison. What do you think of those comparisons?

A: I was completely blown away when I saw their review. I’m still blown away by that review. It’s what many, many authors aspire to.

A: I just submitted the manuscript for a book about World War I. Two young, naïve sisters from Baltimore volunteer for duty as a nurse and an ambulance driver on the front lines in Belgium. They come of age and fall in love in the face of one of the most horrific wars in modern history.

The nurse falls in love with a doctor, who helps to train her for medical school—as her dream is to become a doctor herself. The other sister is more mechanically inclined, and falls in love with another ambulance driver—another woman. The book is about the obliteration of the Old World, and the machine of the War that creates the world of the 20th century.

A: I’m currently working on a new novel called The Forgotten Knowledge of the Hippies. It’s a reflection on what the ‘60s and ‘70s have in common with what’s going on in the world today.

--Interview with Deborah Kalb. Suzanne Feldman will be participating in the Temple Sinai Authors' Roundtable Feb. 29 in Washington, D.C.