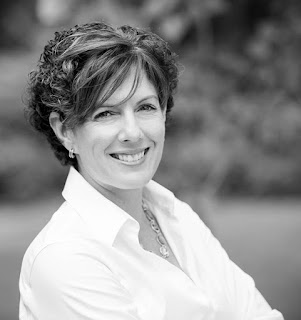 Kathleen M. Blasi is the author of the new children's picture book Hosea Plays On.

Q: How did you learn about Hosea Taylor Jr., the subject of Hosea Plays On, and why did you decide to write a picture book about him?

A: I learned about Hosea Taylor Jr. through an article that was published upon his passing (Democrat & Chronicle, reporter Sarah Taddeo). I saw the possibility for a picture book when I read that Hosea saw music as an art to which children could dedicate themselves. And when I learned that he offered free music lessons, I was hooked.

A: My research required employing a device that Hosea himself employed every day. Talking with people.

I began by meeting with the reporter, Sarah Taddeo. From there, at her suggestion, I met with a community advocacy organization. Then vendors and administrators at the Market, and others who knew and loved him. I took notes, gathering as much information as I could, until the heart of the story became clear to me. 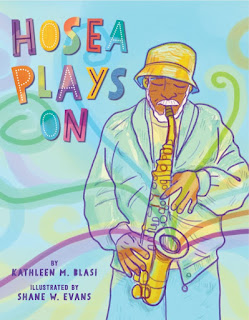 In addition, I looked at bus routes to make sure the bus numbers were accurate and had a music professor review the manuscript to ensure I was accurately describing Hosea’s playing. And, with his feedback in mind, I revised.

One thing that surprised me was that before Hosea shared his gift of music with kids, for a number of years he taught karate—very often for free. It was when his body tired of that, that he turned to music.

Q: What do you think Shane W. Evans's pictures add to the book?

A: So much! I love how Shane depicted music as swirling and flowing throughout the story. We can almost hear Hosea’s tune carrying through the marketplace, and beyond. The whimsical color palette and elements are striking – and very inviting to readers of all ages.

Shane amplified Hosea’s place in the community, as someone who draws people together.

Q: What do you hope kids take away from Hosea's story?

A: I hope kids recognize that like Hosea, they can be everyday heroes, too. That all it takes is discovering and tapping into something in oneself that can make even one person’s day a little bit better.

I hope that when they hear a saxophone play, they think of Hosea and his kindness, affirming that he does indeed, play on. And that they can, too.

A: Through my agent, I have a narrative nonfiction picture book out on submission. I’m writing a poem that I hope has the chops to be a picture book. And I’m at the beginning stages of writing a story that is based on an extension of Hosea Plays On.

A: Thank you for the opportunity to “chat” here with you, Deborah!

One thing—I’ve relished in the serendipity on my journey with Hosea, including when Sterling told me that when Shane Evans reviewed the manuscript, he said “I’ve been to this place.” Turns out, he lived in Rochester, New York, during his high school years. How ‘bout that?

Also, I have a super-fun event coming up on the evening of Feb. 17. The public library in Hosea’s neighborhood is hosting a reading and concert, where I will do the reading of Hosea Plays On and musicians who played with Hosea will do the playing.