Emma Copley Eisenberg is the author of the new book The Third Rainbow Girl: The Long Life of a Double Murder in Appalachia. Her work has appeared in a variety of publications, including Granta and McSweeney's, and she directs the Philadelphia-based literary organization Blue Stoop.

Q: In a New York Times review of The Third Rainbow Girl, Melissa Del Bosque calls the book "an unflinching interrogation of what it means to be female in a society marred by misogyny, where women hitchhiking alone are harshly judged, even blamed for their own murders." What do you think of that description?

A: I love this, it's such an astute reading.

Del Bosque picked up so well on the work I was trying to do to show that it's not so much what happened in the moment these women were killed but rather everything that happened after that can teach us about the ways our culture tries to shove complicated histories of oppression and messy individual people into simple stories, in this case the simple story of Appalachian men being "dangerous" and women being "naive," destined to get murdered.

We live in a world where we will do almost anything for a dead woman, but very little for a live one and where we are content to use the coal and timber mined from Appalachian communities but are not much interested in understanding the real issues facing contemporary West Virginia.

If you zoom out and look at all the threads I try to trace in and out of the case in my book, what I hope you will see is that misogyny is everywhere in our culture, not only in this particular part of Appalachia.

Q: Why did you decide to write the book, and what impact did writing it have on you? 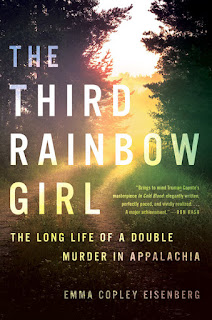 A: The time that I spent in Pocahontas County, West Virginia, stayed with me and nagged at me for years after I moved elsewhere and I had heard about the murders while I lived there but didn't dig too deeply into them at first.

I was in graduate school for fiction writing and was trying to write some of the material that would become the book as fiction, but it wasn't working.

Then while I was in graduate school for creative writing in Charlottesville, Virginia, several events happened in quick succession--the Rolling Stone Rape on Campus article was published about UVA, two young women, one white, one black and trans, went missing from the area and the forces that would become pro-Trump white supremacists started rearing their heads all over town.

I realized I wanted to participate in the conversation occurring around these issues so I started writing some small journalism pieces.

Opening the door to nonfiction turned out to be the way into writing this book more honestly and ethically, as you can make clear in nonfiction your own background and what you are bringing to telling a particular story.

I started reading some of the coverage about the 1980 Rainbow Murders that was available online and immediately it became clear to me that the story that existed was deeply wrong and portrayed a stereotyped image of this place I had known so well and of the kind of women who might come there as travelers.

It was an impulse to contribute, to tell the story hopefully better than it had been told before.

And then my own personal experiences came knocking again and began to rhyme with the things I was learning about the murders, so I decided to include some pieces of insight into the contemporary community I gained while living there as well.

A: The Third Rainbow Girl is truly the only title I ever considered for this project which is very uncharacteristic of me!

One of the first things that I learned about this case from the coverage that was available was that there had been a third woman named Liz who hitchhiked across America with the two women who were killed, but she parted ways with them before arriving in West Virginia and survived.

I connected with her and she shared with me her feelings of survivor's guilt, that she was not harmed but was definitely traumatized by what happened.

As I researched and reported and learned more, the idea that many people, both in Pocahontas County and outside it, were traumatized by the events surrounding the murders and their investigation began to take root in my mind.

There are many "third Rainbow girls" in this book--Liz, yes, but also the nine local men who were accused of these crimes over the years and their children, as well as the next generations in the families of the women who died and the law enforcement officers who participated; men and women I met during my years there, and perhaps me also.

A: As a fun thing in coordination of this book's release, I had an artist design enamel pins that simply say "BOTH/AND."

This book taught me, over and over again, that two things that seem in contradiction--victim, aggressor; misogyny and the pain of men; defense, prosecution--can both be true at the same time. One person's trauma does not cancel out another's, even if they are the one who inflicted it.

We won't ever find justice--in our courtrooms or our private lives--if we force ourselves to choose and only believe one single story.

A: I'm returning to fiction! Writing fiction taught me how to make vivid scenes and render real people as complicated on the page, writing nonfiction allowed my fiction to become more joyful and strange. I'm working on a short story collection and a novel.

A: This book has three main "highways" if you will--the crime, as we've talked about, the history of the rich community where that crime took place and the ways it reveals important history about Appalachia more broadly, and the way my personal story intersected and informed the other two.

If you like essays, memoir, cultural criticism, history, or writing about criminal justice, you may find something here for you.