Jeffrey Colvin is the author of the new novel Africaville. His work has appeared in a variety of publications, including Hot Metal Bridge and Painted Bride Quarterly. He is an assistant editor at Narrative magazine, and he lives in New York City.

Q: How did you come up with the idea for Africaville, and for the family you write about?

A: The stories that became Africaville began in the late 1990s as a series of short stories set in rural Alabama. The stories were set in communities along the route from Selma to Montgomery taken by protesters during the 1965 march for voters’ rights.

Many people are familiar with the leaders of the marches such as Martin Luther King, but I was interested in the lives of the residents in the rural communities along the route. How had the communities been formed? Had any of the residents marched? If so why? If they did not march, why not?

I have a personal connection to such communities since my grandmother raised a raised a family in rural Alabama community. During the early 1980s I came home on a leave from the Marine Corps to find that my grandmother had moved away from her former community and that the last houses in the community had been torn down.

The short stories I wrote were inspired by stories my grandmother and her former neighbors told about their community.

These stories became part of a larger narrative in 2001 after I read an article in The New York Times about a community called Africville that once existed on the northern edge of Halifax, Nova Scotia.

Africville was formed in the late 1700s and existed until the late 1960s when over the objection of residents, the city of Halifax forced residents out of their homes and razed the houses, churches and other structures in the community.

I was captivated by the events that transpired during the protracted fight by the residents to oppose the town’s destruction.

I realized that many of the stories residents of Africville told about their community were similar to stories told by my grandmother and her former neighbors, stories with interesting characters, stories of successes but also stories about the lack of opportunity due to the community’s strained relationship with the larger white community. 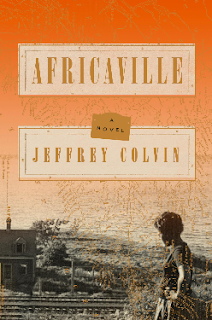 After more research I was convinced that a story based loosely on the history of Africville could be the focus of a compelling novel. I decided to use the story of three generations of one family to connect Africville to lost communities in the south to tell a larger story about loss, family and community.

Q: In an interview with NPR, you said of your character Etienne, "I wanted to look at how a person who could pass as white still - what kind of challenges might they have in the world, what kind of personal challenges they might have, how do they view themselves, what do they think of themselves, for example, what do they hide from their friends, How much of themselves that they reveal to the world." What do you think Etienne's experiences say about the role race plays in the U.S. and Canada?

A: Etienne was created out of my interest in exploring how a decision to pass for white affects a character. What might lead a person to this decision? Under what emotional toil might they struggle after the decision had been made?

As a teenager living in Montreal, Etienne experiences the pain of finding out that he was adopted. He also struggles to accept his blackness while having his blackness questioned by some of his school mates.

His struggle after deciding to pass is an internal one that strains his interactions with his wife, his son, his work colleagues, and the residents of the rural Alabama community where he settles.

His son Warner learns as an adult that he has a black grandmother who was raised in Africaville. His desire to connect with former residents of Africaville is hampered because they are hesitant to accept him given his father’s previous estrangement from the community.

Etienne’s life demonstrates the powerful way our identity can complicate our lives. It also reveals that many of the internal and external struggles characters have around their racial identity can exist whether the character is living in what is thought of as the liberal and progressive north, including Canada, or the conservative south.

Q: The novel follows several generations of a family's history, in various locations. How did you research the book, and did you learn anything particularly surprising?

A: I began researching Africville not to gain material for a novel, but because I was taken with the story of the village. I read articles and books, watched documentary films, and made several visits to Halifax. I also researched the history of blacks in other parts of Canada and general Canadian history.

By the mid-2000s I had a general outline of the basic narrative so further research was guided by questions that arose as I revised. Some historical details I uncovered entered the novel in a specific way. Others became the bases for fictional ideas and, of course, much was discarded.

At about the 15-year mark, I made the decision to stop doing research and work with the story as it existed. By then I had been writing short fiction for over a decade, so I felt comfortable believing in the narrative and following the story as it developed.

One surprising fact I did not know when I began my research was the extent of  black immigration to Canada from the Caribbean. Incorporating this fact into the novel was exciting because it allowed me to write about characters outside my own experiences of growing up in the southern United States.

A: I wrote Africaville feeling a strong connection between the southern rural communities I had been writing about, and the community I came to know in Nova Scotia.

I believe many readers can connect to the notion that although we may lose physical connections to our families and the communities we grew up in, powerful emotional connections remain. I also hope readers appreciate the novel’s exploration of the larger themes of immigration, race, identity and loss.

A: I am working on another historical novel. As with any work new undertaking, you never know how it will pan out, but I am very excited about the work so far!

A: Writing Africaville made me further appreciate what a challenging but ultimately rewarding experience it can be to uncover one’s family or community history. I also enjoyed bringing this part of North American history to a wider audience.