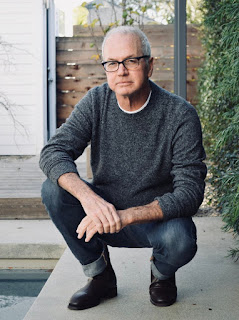 Chris Hauty is the author of the new political thriller Deep State. A screenwriter, he lives in Venice, California.

Q: Did you need to do any research to write Deep State, and if so, did you learn anything surprising?

A: Not too terribly much. The White House and the goings on in the West Wing are such a huge part of popular culture in the U.S.

I read a couple books by West Wing insiders, one of which was by a former intern. That was very helpful.

Otherwise, I was researching on-the-fly as I wrote, collecting small, seemingly insignificant detail with which I could “salt” the narrative with just enough detail to create an illusion of verisimilitude.

Q: You've worked as a screenwriter--how different was it to write a novel as opposed to a screenplay? 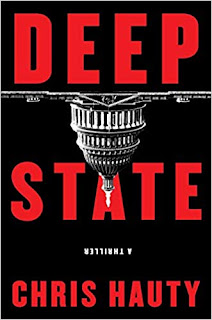 A: There is soooooooo much more freedom writing novels.

Screenplays are about accommodating other people’s visions into the script, whether producer, star, studio exec or director. The form is extremely standardized and the rules ironclad.

From the first day of work on my first novel, I realized I was embarking on a much more liberating creative journey. Fantastic!

A: I’m a furious outliner. I brood on a narrative for weeks, tweaking and folding more ideas into the plot as I work. Characters take shape.

In this process, there is an almost symbiotic push and pull between character and plot, each driving the other to deeper and deeper understanding and development.

With Deep State, I had pretty much the entire story set down in outline form before I started writing the manuscript. However, with the follow-up, I did come up with a massive twist for the ending well after the time that the first draft was completed.

A: I'm finishing a final edit of the above-mentioned follow-up to Deep State. The story picks up pretty much where the first book leaves off. I've also been contracted to write the pilot for a TV adaptation of the book.

A: I have two different colored eyes.