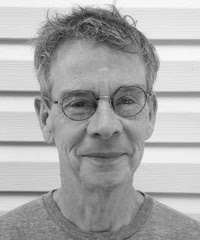 Daniel Lawless is the editor of the new poetry anthology Plume Poetry 8. His work has appeared in a variety of publications, including Ploughshares and Prairie Schooner, and he is the founder and editor of the poetry magazine Plume. He lives in St. Petersburg, Florida.

Q: How did you choose the poems that appear in this anthology?

A: Mostly, since its inception, Plume has been something been something of a one-man show: in those days I read every submission; penned every email soliciting, as one might in a cold call, new work; designed the site (in conjunction with former Ampersand publisher Jason Cook); wrangled the layout for the online issues, etc.

Fortunately, as we slowly added staff, that has changed: I can no longer imagine wearing, simultaneously, all those hats (odd image, but suitable for the madman I must have appeared).

The poets Amy Beeder, Nancy Mitchell, and Amanda Newell all help read submissions now, for the online issues, as well as conduct the Featured Selections interviews, and contribute essays and book reviews.

Rarely do we need to solicit work these days -- as poets have become familiar with us, they send poems via email, unbidden.

But the print anthologies remain my bailiwick, at least in the selection of poems. While a rather small number of poems from Submittable make their way into the books, by far the majority arrive in response to my solicitations, poets sending, usually, three to five poems, from which I alone -- for better or worse!  -- choose one (or none) for the anthology and reserve another for a future online issue.

Q: In the book's preface, Bruce Bond writes, "All good poems are love poems." Do you agree with that, and how do you see that idea reflected in this book?

A: I agree with Bruce in the sense that poets must love the subject about which they are writing, whether that subject is altogether unpleasant (as it so often is, and so one appreciates all the more humor in contemporary poetry); or quite the opposite.

Also, there is the broader and more banal application: that poets must adore the art itself, maintain against all odds along a torrid love affair with language in all its nuances and permutations, its shadows and associative familiars. Isn’t that why, or partly why, we all love poetry? 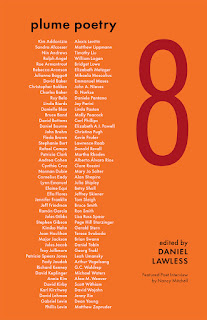 Poems that are not love poems, whose passions are merely performative or self-interested, poems that are not of the species must be written, that evince the sterility and production values of a not particularly inventive indie short, to change analogies: these don’t appear in Plume. I could be wrong. I hope not.

Q: The book includes a section in the middle devoted to the work of Kevin Prufer. Why did you focus on his work in this section?

I wish I could enrobe this decision in other fineries – how his poems “fit” or play well with those of the issue’s contributors, for example. The truth is, though, Plume never has been thematic even in that sense.

The selection of Mr. Prufer’s work was of a piece with the process that results in any poet’s work appearing in Plume – it is good, even great (although I am cognizant of the dubiousness imprimatur  of that latter designation --  great poems, in my experience, are in exceedingly limited supply).

Now, I know, I should examine here the multitude of meanings and examples of that might comprise that “good” – but I imagine your readers’ time and patience are limited, and the debate is, needless to say, ongoing, ever ongoing.

Suffice it to say, that “good” is my “good.” I can only hope – my tastes are fairly catholic – that our readers’ preferences coincide more often than not with mine such that they’ll be confident in finding a healthy number of poems they’ll enjoy, and be moved by (among other possible experiences) in the anthologies..

Sort of like, when we still were purchasing music on CDs – or vinyl – one bought the new Radiohead (or Velvet Undergorund, whatever – wait not such a good analogy – Meta Machine Music! – but you get the idea), bought them  on faith, as it were.

Unsure of what we’d discover, but with some confidence, given the artist’s track record (excuse the pun), that something, perhaps many things, would again prove your initial, happy  rendezvous predictive of the same in future encounters.

Q: What role do you see these Plume anthologies playing for readers, both those who tend to read poetry but also perhaps those who generally don't?

A: A really good question. My answer, when we first began offering print anthologies, would have been the most basic one might imagine: some readers, what number I still don’t know, simply like to hold the book-as-object in their hands.

I won’t bother you with the aesthetics or the practicalities undergirding that desire, but it was there, and remains so. Thus, that was their initial role, to grant that wish. And it’s not to be sniffed at.

I am certain many, many poets themselves value print over digital presentations of their work (despite my assurances that our online readership is many times greater, in toto, than our print one). I’m a physical-book person, too.

Yet, as we continue to produce the print anthologies, I think their role has expanded. More and more often, for instance, we find teachers – and how many poets are not teachers these days? – using Plume anthologies as texts in their classes. Many who do have written to me to applaud their utility as such.

As our blurbs will attest, Plume is nothing if not “eclectic,” open to new and old alike in terms of form, subject matter, contributors’ notoriety or lack thereof, etc.

We try, in a couple of hundred pages, to offer a wide range of poetries, in other words – hastening to add that this catholicity is not for its own sake, but as mentioned the natural consequence of the undeniable multiplicity of what is, in fact, “good.”

As our Mission statement has it, rather too grandiosely, “the only password is beauty.”

In sum, it is our proposition that readers new to poetry will find comfort in the “names” – be they Rae Armantrout or William Logan, or any in between.

And that committed readers of poetry -- no doubt many who are poets themselves – will find that comfort alluring, too, but be equally intrigued to discover the “deep cuts” to use once more the CD/album analogy.

A: I’m working, always, on new poems, for a book I hope will be published in the not too distant. Of late, many of the poems are about my brother, who died recently at 70, a schizophrenic diagnosed at 15.

Of course, while my brother’s life is the thematic sun of this little galaxy, the planets and asteroids that orbit it are explored, examined, as well, through the wonders of the telescope that poetry sometimes can be.

A: Yes, first, that I am grateful for this opportunity to speak about Plume.

Second, and here I assume the role of a political candidate, your readers can find more about us here.

Third, and last, poets from the newest anthology, Plume Poetry 8, will be setting up readings/events around the country, beginning soon –

Then we’ll take the show on the road in earnest.