Alexis Schaitkin is the author of the new novel Saint X. Her work has appeared in a variety of publications, including The New York Times and Southwest Review. She lives in Williamstown, Massachusetts.

Q: The Publishers Weekly review of Saint X says, "Schaitkin’s unsettling debut plays with the conventions of the romantic thriller to comment on the uneasy relationship between working-class residents of a fictional island in the Caribbean and the wealthy American tourists who visit it." What do you think of that assessment?’

A: I think that’s where the story starts. The novel’s opening chapter charts a single week at a resort in the Caribbean, and it explores how tourists and local employees inhabit this setting together—how they interact, how they perceive each other, how they perform for each other.

But from a single week in this confined setting, the story opens outward, and it really becomes the story of where all of these characters find themselves nearly 20 years later. They’re in Brooklyn, California, Saint X, and they’re still haunted by this tragedy, its fallout, and the enduring mysteries that surround it, still trying to figure out who they are in its aftermath. 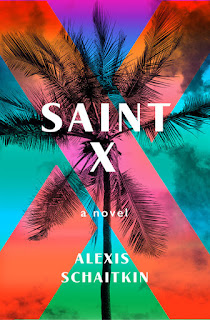 Q: How and why did you create your fictional Caribbean island of Saint X?

A: The choice to create a fictional island, and to leave it anonymous, as Saint “X,” begins as an ironic nod to the way American tourists so often experience the Caribbean—staying at a resort where an island’s particularities are smoothed into a sort of generic tropical paradise.

I knew from the beginning that part of what I wanted to do in the novel was to start there, from this tourist’s eye view, but gradually go deeper and deeper into this setting. It’s fictional, but it’s also pretty intensely detailed and particular, and the island undergoes its own wrenching transformations, just as the characters do.

Ultimately, creating a fictional island seemed like the only way to go, because the novel is partly about how Alison Thomas’s death, which becomes international news, one of those obsessively followed media stories, transforms this place.

It impacts the tourism industry. It becomes a pivotal event on the island, and to impose that fictional story on a real island would have been to create an alternate history, which I definitely didn’t want to do.

Q: One of the last chapters of the book is titled "Remember This." What do you think the novel says about memory?

A: That memory can be a kind of ghost, and ultimately, we each have to decide how we will live alongside that ghost. Do we welcome it in? Push it away? Do we let it become more real to us than the people around us?

A: I knew the beginning and the end, but the middle changed a lot. I don’t want to give too much away, but I will say that the novel ends with a character who might seem unexpected, but who I think secretly holds together and underpins a lot of the story.

A: My next novel. It’s very different in terms of subject matter, and it's probably stranger, but I do think it shares the tone and atmosphere and the underlying sense of mystery that drive Saint X.