Tina Cane is the author of the new poetry collection Year of the Murder Hornet. Her other books include the young adult novel Alma Presses Play, and her work has appeared in a variety of publications, including Spinning Jenny and The Literary Review. She is the Poet Laureate of Rhode Island.

Q: Over how long a period did you write the poems in Year of the Murder Hornet?

A: I wrote this collection over a couple of years--the latter half of the previous administration and the early portion of the pandemic.

I culled many poems from the book's earlier incarnation, since they were rooted in political speech--taken from impeachment transcripts and the like--used in personal context. I am still interested in that overlap, but their immediacy didn't feel as enduring as when I wrote them.

Q: The writer Camille Guthrie said of the book, "With boldness and grace, Cane negotiates a tense present, a distressing future, and the wish for a 'perfect past' tense." What do you think of that description?

Q: How did you choose the order in which the poems would appear in the collection, and how was the book's title chosen? 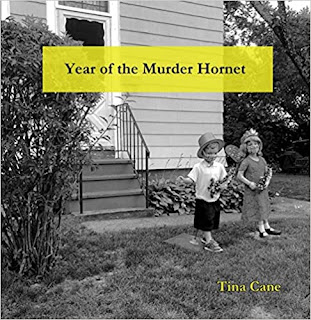 A: Poet and friend Sean Singer was a big help when it came to ordering the collection. He read some of these poems as they I wrote them, but was able to step back and discern an arc that was difficult for me to see. I knew I wanted the long poem, "What We Talk About When We Talk About Paths" to figure at the center of the collection--as a kind of associative interior of sorts.

The first version of this book was called Dog Whistle, since there were many more political allusions. After I wrote the title poem and as the collection emerged, I thought Year of the Murder Hornet captured the notion of a temporal frame and flux with a feeling of fleeting, ever-changing hysteria--which is one way to describe recent times.

A: Perhaps, "that we don't struggle alone," which is a line from "Shelter in Place." I am not sure it's for me to hope what a reader comes away with. I do, however, hope there exists a reciprocal recognition of shared humanity through the poetry. In any case, that's the reason why I write.

A: I am finishing writing a new novel-in-verse for young adults for the same imprint--make Me a World/ Random House--which published Alma Presses Play.

I am also slowly writing new poems for a collection called Search Engine, and editing Poetry is Bread: The Anthology, with Nirala Press, which will feature poems shared through the distance reading series I began at the start of the pandemic.

A: I think frank: sonnets by Diane Seuss is brilliant. I don't necessarily equate accolades with merit, but the Pulitzer people got this one really right.