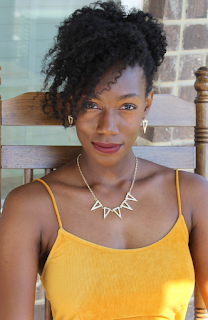 Camille Baker is the author of the new novel The Moment We Met. She also has written the novel Have We Met?. She lives in South Chicago.

Q: Why did you decide to focus on your character Tiwanda, who also appeared in Have We Met?, in your new novel?

A: Every time I write a novel, there tends to be a side character that catches my attention. It’s one of my favorite parts of drafting. Tiwanda was that character for me in Have We Met?. After reading through that first draft of HWM, I knew I wanted to explore her story.

I remember making notes for revision and going on a tangent, filling page after page in my notebook with thoughts about Tiwanda. That feeling of excitement about discovering characters is what drives me to write, and Tiwanda gave me plenty of that excitement.

Q: How would you describe Tiwanda’s relationships with her family members?

A: Tiwanda experienced the loss of her parents at a young age, and that made her cherish family all the more. At the same time, she has estranged family members that she tries to reconnect with over the course of the novel.

To Tiwanda, her family represents a connection to her parents. I loved delving into the messy wonderfulness of Tiwanda’s family. In some ways, it mirrors my own.

A: My editor actually came up with my title! My first go at it was When We Met, but it was used too much so my editor suggested The Moment We Met, and I loved it.

Some of my most recounted memories are of meeting someone who became an important person in my life. (I met my best friend at math camp the summer before sixth grade!) This title emphasizes these important meetings, which fits the book perfectly because it has plenty meet cutes. 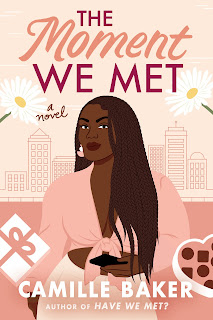 A: Tiwanda learns a lot about herself throughout the novel, so I hope readers identify with that. Even in adulthood, you should still be open to learning more about yourself.

I think one of the greatest disservices we can do to ourselves is make up our mind about who we are, thus shutting ourselves off to possible changes and discoveries. I don’t believe we’re meant to be stagnant. Who said there was an age limit on becoming who you’re meant to be? I hope my story promotes lifelong self-discovery more than anything.

A: I’m rewriting a first draft of a contemporary novel that I wrote early last year. I had a false start a few months ago, and had to pump the brakes a third of the way in. (Gotta love the writing process.) It’s very ambitious, has way too many POVs, but it explores themes I tend to circle: found family, various forms of love, and character growth.

A: The Moment We Met is set in the same world as Have We Met? but it functions as a standalone novel. If you haven’t read HWM yet, feel free to dive right into The Moment We Met. If you have read HWM, you’ll see some familiar characters and meet many new ones. This is the last book I have planned in this world at the moment, but only time will tell!

Thank you so much for having me!