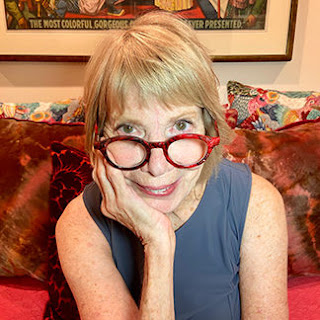 Abigail Cutter is the author of the new novel Long Shadows. She lives in Waterford, Virginia.

Q: What inspired you to write Long Shadows, and how did you create your character Tom?

A: My husband and I inherited a pre-Civil War house in the foothills of Virginia’s Blue Ridge mountains and didn’t know until the first night we slept there that it came with a very active ghost.

The house was filled with family possessions but had been uninhabited for 20 years. Every time we painted, repaired the roof, or ripped down wallpaper, something stomped up and down stairs and slammed doors angrily.

The house is a spacious, warm, sunny place that I love, and I despaired of being afraid to stay there alone at night. I thought that if I researched family history and that of the area, I might appease whatever was so unsettled and could solve my own problem.

And it worked. Halfway through the writing process, angry activity switched to friendly and now seems to have stopped altogether. I hope that remains the case!

Creating Tom was easy. My husband’s great grandfather lived his entire life in our house except when he was a young private in the Confederate Army and then a Union prisoner for a year.

There were hints in family letters from that era that the real Tom early in the war awakened to the horror of defending slavery and the terrible sacrifices required of ordinary, non-slave owning folks to do so.

There’s also evidence that he suffered from “battle fatigue” for the rest of his life. My book’s narrator, Tom’s ghost, has what we now call PTSD that has lasted for over 150 years while he’s attempted to evade his troubled past.

Letters and diaries of young Confederate soldiers that I found in historian Edward Ayers’ database, the Valley of the Shadow Project, helped to fill out his character.

So many of them described life as a common foot soldier, rarely seeing generals, or knowing where they were headed next. Like them, Tom is a lowly grunt assigned the worst tasks of soldiering.

Q: What do you think the novel says about the legacy of the Civil War today?

A: The title Long Shadows has a double meaning. It’s a tale of a personal haunting, but the country is haunted also–by the legacy of slavery–and will be for generations to come.

The novel highlights the Civil War’s terrific toll on the South’s landscape, economy, and people that’s lasted for generations. It’s hard to say what gain came to White inhabitants of the Confederacy or to their descendants by fighting to preserve the awful practice.

A: I hoped Tom would eventually find release from a past that has kept him prisoner in his own home, but in the beginning, I hadn’t a clue how I’d make that happen. 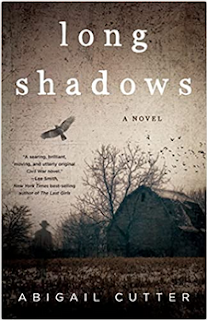 I’ve always been a believer in ghosts and felt sorry for the one in our house. So, I had a lot of sympathy for my character Tom and how lonely he must be with no one who could see him, touch him, or laugh at his jokes.

As for my writing process, I rely on my many years as a meditator to drop into the “zone” and then give my unconscious mind permission to lead as I write.

Lots of revision and editing follows, but it begins as an intuitive flow that chooses its own direction with characters behaving in ways that really surprise me.

So, yes, there were changes along the way, but always with the ultimate goal that Tom would find peace.

Q: How would you describe the dynamic between Tom and your character Phoebe?

A: Initially, Phoebe and Tom are adversaries. His comforting, better memories are embedded in every object in the old place, and they reinforce his illusion of an untroubled past. Clinging to his childhood home, he is still the well-regarded husband, father, and community leader Tom.

Phoebe has little regard for the old-fashioned furnishings. As she and her husband haul them away, Tom fears the horrors suppressed for so many years will rise to the surface and drag him to Hell. He desperately tries to drive Phoebe from his home and almost succeeds.

She has two choices: she can convince her husband to give up the house, an unlikely prospect because only she can hear the ghost, or somehow discover ways to connect with it and convince it to leave.

At this point I was influenced by a second-sighted character in a short story by Anthony Doerr, "The Hunter’s Wife." Phoebe gradually teaches herself to hear Tom’s voice, and he realizes that the secrets that isolated him emotionally from his family after the war are safe with her.

In some ways, she provides Tom with a solution for his “battle fatigue” that has been found today to be effective: allowing him to talk freely about his harrowing psychological scars. By the end of the story, they have developed lasting compassion for one another.

A: I’m working on a novel set in the same region, southwestern Virginia, but in the late 19th century during the rise of the Jim Crow era.

The central character is Dora, an orphan who lives with her grandmother on a mountaintop tobacco farm. When the tobacco market crashes, the teenaged girl takes work in the valley to support the two of them.

She‘s a teacher in an all-Black school where one of her students is Andy Dudley, the nine-year-old son of a Black family who are close friends. When a lynching occurs, Dora is compelled to face the truth about her neighbors, her own past, and the mystery of her Quaker and politically active father’s death.

A: The Shenandoah Valley, where Long Shadows is set, is where 30 percent of the Civil War was fought for four years. It’s now a 140-mile stretch of quiet farms and a few small cities, a place where it’s hard to imagine so much bloodshed and personal agony common even on its remote backroads.

In the book, a major secondary character is Tom’s lively sister Mary, 16 at the start of the war, who reveals what life at home is like where she can hear cannons firing as often as the beating of her heart and the family depends upon food foraged in the woods.

The novel moves between the present and 19th century battlefields, a prison, and the home front.

And there’s a character of mysterious origins, Mr. Tatternook, who is a seer and heals through knowledge of Nature.