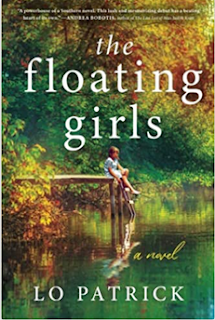 Lo Patrick is the author of the new novel The Floating Girls. A former lawyer, she lives in Georgia.

Q: You’ve said you were inspired to write The Floating Girls by driving past a certain spot along the Georgia coast. How did that lead you to write the novel, and how important is setting to you in your work?

A: We were visiting friends near Savannah when I saw a spot of land on the side of the road that caught my attention. I wasn’t able to stop thinking about the place—a house under a huge canopy of oaks and Spanish moss.

Although the image captured my mind, Kay’s home on Hack Road is not an exact replica as the house and road that so intrigued me was in a pretty nice part of town and not the lean-to Kay’s family is living in.

That said, you don’t have to travel very far to find spots of land that time seems to have forgotten. The near-constant development in and around the state somehow manages to skip over whole areas, families, towns that are left like bits of uneaten food in the dishwater.

I live in the metro-Atlanta area, so I was intrigued with this idea of being so removed, so isolated, trapped not only in a bit of a time-warp but also in the clutches of a truly dysfunctional home.

Setting is second to characters to me, but I also think environment makes us who we are, so it’s a chicken or the egg dance most of the time. The characters act this way because of where they live, how they’ve grown up, what it’s like “there.”

Temperature is an undercurrent of the story; anyone who’s lived in the deep South knows how hot and long the summers can be. It becomes a part of a person, this ability to get through it.

Q: How did you create your character Kay?

A: Kay more or less introduced herself to me after I started writing. I don’t plan; I let myself go with whatever it is I’m thinking and hope the editing process will iron out the kinks. The plot of The Floating Girls changed quite a bit over time, but Kay was as constant as the tide.

I’ve known plenty a spitfire in my day and fancy that people are often a lot smarter and a lot tougher than they might initially appear.

A little, gangly, potty-mouthed girl growing up in rural poverty has some wisdom to her. A more refined child with a sophisticated upbringing is not going to understand some truths about life that a Kay would.

I wanted both her discontent AND her eagerness to be happy to come through at all times.

Q: Can you say more about your writing process?

A: I never know how anything will end when I start writing. I can be halfway through a project and completely change the plot or eliminate a character entirely. Usually, as was the case with The Floating Girls, I push myself to just finish the book! Then I go back and start really working with the story.

My characters’ personalities also develop further during the editing process. I start to recognize that something is or is not how they would act, talk, etc. I also think a mystery is a little easier to tie in knots once everything is down on paper—or laptop.

A: How charming, endearing, and likable honesty is. Kay is unflinchingly honest both in what she says and what she thinks, and I think this commitment to truth on her part is what gives her her strength in the face of so much disappointment and chaos.

A: I have been working on a few things and am actually trying to write something about North Georgia—a very different animal than Kay’s marsh.

I have actually spent much more time in Georgia’s foothills and in the Blue Ridge mountains than I have anywhere else in the state. The vibe and people there are unique and a little hard to pin down.

I have been trying to capture some of that setting and have something in the works now with an older narrator. I’ve enjoyed writing from a completely different perspective.