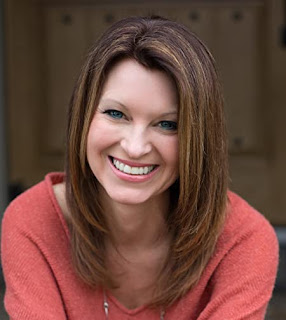 Shannon Stocker is the author of the new children's picture book biography Listen: How Evelyn Glennie, a Deaf Girl, Changed Percussion. It focuses on the life of percussionist Evelyn Glennie. Stocker's other books include Can U Save the Day?. Also a musician, she lives in Louisville, Kentucky.

Q: In your new book’s Author’s Note, you write that you are a musician with a serious health condition: “Like Evelyn Glennie, I heard ‘You can’t’ too many times. But, like Evelyn Glennie, I knew I could. Perhaps that's why her story captivates me.” Can you say more about the inspiration for this book?

A: Absolutely…and great question! I began having some medical challenges in my early 20s. That’s actually what attracted me to medical school. Prior to hospital visits, I’d been a radio/TV/film major at Northwestern University, with aspirations of becoming the next Barbara Walters.

But my last year of medical school, I began having a lot of pain in my neck and right arm, with spasms that drew my right ear toward my shoulder. So many doctors told me it was all in my head, anxiety-driven, or that I was a “drug seeker.” It was horrible. I think that was the first time I really understood how much patients must advocate for themselves.

Eventually, a tumor was found and removed from my arm because of its potential to become malignant…but my symptoms worsened, instead of improving. For the next five years, I saw doctors all over the country who couldn’t figure out what was wrong with me.

Eventually I saw a physician in Florida who believed I had Reflex Sympathetic Dystrophy (RSD). By that time, however, my disease was quite advanced and the United States had no treatment options left. I required a wheelchair, had withered to 85 pounds, and my right arm was covered in deep ulcers that would not heal.

He sent me to Mayo in Rochester, where I was diagnosed with RSD. Still, they had no real treatment options—instead, they suggested my husband consider putting me in permanent care.

That’s when he and I took matters into our own hands and flew to Monterrey, Mexico, where I took part in an experimental treatment for people with severe cases of this disease.

They put me into a coma using the drug ketamine, which was meant to “reboot” my autonomic nervous system…sort of like you’d reboot a computer. Eight months after the coma, I was pregnant with my first child. If I had listened to everyone else, I wouldn’t be alive today.

Q: How did you research Evelyn Glennie’s story, and did you learn anything that especially surprised you?

A: EVERYTHING about Evelyn’s story amazed me, but I’m not sure that anything surprised me! 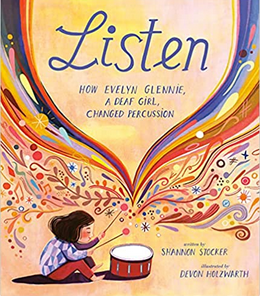 To research her, I read and watched everything I could get my hands on about her: articles, interviews, films, her TED talk, YouTube videos. I listened to tons of her music and watched her perform online. Everything I saw entranced me. She’s an absolutely amazing human being, and one of the most talented musicians I’ve ever seen in my life.

Once I’d decided I had to write her story, I reached out to her team to see if she’d be interested in helping me tell her truth. They responded quickly that she was, and we held our first Skype session shortly thereafter.

Actually, I do think there was one thing that surprised me. Evelyn’s ability to read lips is astounding. I’ve since come to learn that this is not uncommon in the deaf community, but it was my first personal experience with the skill.

Q: What do you think Devon Holzwarth’s illustrations add to the book?

A: Oh my gosh…Devon’s artwork is incredible. As a writer who does not illustrate, receiving artwork to your story is always a special thing. Writers might have visions of how they thing their characters should appear, or how they think the art might flow, but it’s not our skill—so the illustrator’s visions always blow me away.

But Devon’s art swept me off my feet. Truly, truly something magical. Her art embodied music in every single spread. It was like music leapt off the pages. I could not have asked for a better partner on this book, and it would not be what it is without her. I’m so grateful to my editor, Jess, for pairing us together.

Q: What do you hope kids take away from Evelyn Glennie’s story?

A: I think the expected answer to this question is that I want kids to understand that they are CAPABLE. They can do whatever they put their minds to, no matter what their circumstances might be. And of course, yes, I do want that.

But perhaps even more than that, I want kids to see that those who look different, or seem different, or maybe even are different, are not less than. No one should tiptoe around the disabled. Ask questions. Give opportunities. Open your minds and your arms, because disabled kids still love, and feel, and think, and dream.

I want this world to have less judgement and more open-mindedness.

A: I have not been writing for a bit because we just moved, but I’m finally ready to kick back in again. I have a picture book I’m working on and a screenplay, actually! I’m also noodling another novel. My agent currently has my first middle grade novel out on submission, so I have high hopes for that.

And my next picture book, Warrior, comes out next year! It’s about a girl with cancer. My daughter has brain cancer, so this is another one that’s near and dear to my heart.

Q: I’m sending all good wishes to your daughter and your whole family.

Is there anything else we should know?

A: I guess the only other thing to know about me is that I do have a writing critique business, and I’m hoping to start some online classes on lyrical writing and writing in verse (rhyming) soon! My debut picture book (Can U Save the Day) rhymes, and Listen is lyrical prose—I love both styles.

I am hoping to update my website within the next week, but you can reach me through that (www.shannonstocker.com). I can also be found on Twitter and Instagram @_ShannonStocker, or on Facebook under the name Shannon Otto Stocker. :-)