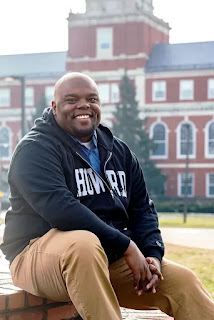 Kwame Mbalia is the author, with Prince Joel Makonnen, of the new middle grade novel The Royal Trials. It's the second in their Last Gate of the Emperor series. Mbalia's other books include Tristan Strong Punches a Hole in the Sky. He lives in North Carolina.

Q: What inspired the plot of the second book in your Last Gate of the Emperor series?

A: The idea of a return to Earth, and to the people left behind when Axum disappeared. How would they feel? Surely not all of them would be happy when the empire suddenly reappeared.

Q: How do you think your character Yared has changed from one book to the next? 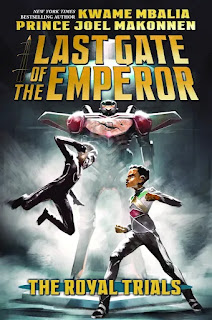 A: Responsibility. Yared is a prince now. He has obligations. But he’s also still a kid. How does this conflict play out in his actions? Remember, less than a year ago he was bouncing around schools on Addis Prime, hiding in futuristic garbage trucks, and trying to figure out how he could help his “uncle” pay his tuition for the upcoming semester.

Q: What was your collaboration with Prince Joel Makonnen like the second time around?

A: The same passion to tell stories of and from the African diaspora persists, and I daresay it shines through with this second book.

Q: What do you hope kids take away from The Royal Trials?

A: A sense of adventure that the future can hold. It would be awesome if kids who might become azmari-engineers in the future read this book now. There’s also the idea that not everyone will like everything you do, and that’s perfectly fine. All you can do is continue to work towards a better tomorrow.

A: More magic and wonder!

A: The scrappers are based on an idea that Artificial Intelligence would adapt an insect-like existence to be more efficient. A fun activity would be to imagine different ways AI might evolve, and what that would look like.