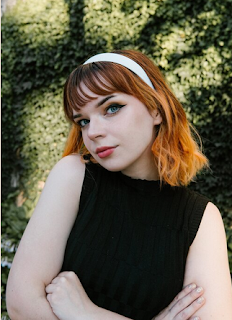 Sarah Priscus is the author of the new novel Groupies. Her work has appeared in a variety of publications, including Barren Magazine and New South Journal. She lives in Ottawa, Ontario.

Q: What inspired you to write Groupies, and how did you create your character Faun?

A: I’d been fascinated by rock history, and “groupies” in particular, for a long time. There’s this mystique to these women, but also a disparaging of them. They’re often portrayed as shallow or flat, or used as punchlines. I wanted to dig into the archetype and give it nuance.

I picked classic groupie “types,” like a screaming teenager, a rock wife, a too-cool ice queen, and more, and dug into them, prodding to create plausible realities.

The idea of obsession tied everything together. In many ways, the groupie lifestyle is an extreme form of seeking attention or validation (which is something we all do to a degree).

I knew Faun had to start the book in a moment of flux. When we meet her, her mother has just died and she’s just dropped out of college. She’s desperate for purpose and structure.

I read a lot about the Manson Family, and how some of the members joined in a period of their life where they were lost and unwanted. I’m not saying rock bands are like cults, but the way the band in the book gives these lost women validation is meant to mirror them a little.

Despite that, Faun needed ambitions of her own. She’s an aspiring photographer and uses the band, Holiday Sun, to bolster her career. The photography thing just clicked—the camera separates her physically and socially. She’s always observing.

That worked from a practical standpoint—she’s an easy window into the story—but it also gave her an arc. She doesn’t want that distance from others.

Q: The writer Caroline Leavitt said of the novel, “Priscus’ audacious debut totally rocks—and rolls—in a dazzling story of groupies, and the young woman who is as obsessed with them as she is with grabbing her own star... A devastatingly on-target story about the cost of fame, desire, and drugs...” What do you think of that description, and what do you think the novel says about fame?

A: Fame is a weird thing. I spent my childhood buying teen magazines and decorating my room with photos of the Jonas Brothers. Retrospectively, that’s bizarre. I mean, these people who I literally did not know were taped above my bed. But they were famous, and because they were famous, I loved them.

Some people want to be famous, but for some, being near someone famous is enough. In the book, it’s compared to orbiting the sun as a planet—you feel the warmth but don’t get the glory.

We love celebrities, we care about them, and we cry if they die. We want to know them personally because we think we know them already. 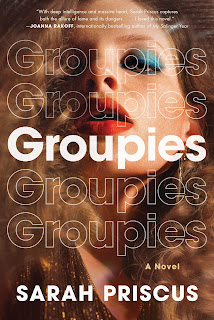 Faun realizes how much people can get away with if they’re important. There’s very little we know about those we idolize. Some parts of their private selves are probably good, but some might be bad or dangerous. There’s a distinct duality between the public self and private self in the book because that’s the most interesting aspect of fame to me.

A: That’s a tricky one. I write best when I outline the story, so my first draft isn’t radically different from the final book.

The first line gives a suggestion of something grim on the horizon without saying explicitly what. This moment comes late in the story, and initially—I’m trying not to spoil anything here—the result of that event was totally different.

My agent, Mariah Stovall, asked me when I signed with her what I thought about switching it around. The way she imagined it made perfect sense thematically, so I was down. Switching that meant heavily editing the ending, but has the same emotional arc as the first draft.

A: Yes, definitely! I was born in 1998, which is obviously way after Groupies takes place in the late 1970s. I’d been consuming a ton of ‘70s media even before starting the book—I just love it.

I’d consult magazine scans, maps, and old articles. Pinning down little details was key, because, for me, details make the story. You know, things like what perfumes were popular, how long the postal service took, or what was on TV on a Monday night.

I kept notes on my phone of random tidbits to work in. There was a Jeopardy question about what cigarettes the Flintstones endorsed, and that made it into the book.

It might sound weird, but I credit the basis of my ‘70s pop culture knowledge to the early seasons of Saturday Night Live. Watching those once-topical sketches helped me pin what was actually in the zeitgeist.

I read about real groupies and muses, of course. Pamela des Barres has some thrilling memoirs, and there are a lot of websites and articles chronicling notorious stories, too. No person was a direct inspiration because I worried that would be transparent. Instead, I’d just twist details until they were new.

One thing I did find surprising—in a bad way—was the “baby groupies”. These were girls on the Sunset Strip at ages 13 or 14. They were just little kids being pulled backstage by adults. That helped me form the character of Kitty, who’s 16, and whose age is constantly a moral stress on Faun, as it should be.

A: I have a few ideas bouncing around! I’m still drafting, so I don’t want to say too much. One thing on my mind is a story loosely inspired by The Shaggs, a 1960s family band whose songs were notoriously “bad.”

I’m avoiding anything too close to Groupies, so the era is different, but there are similarities: music (but making it, this time), close female relationships (but sisters, this time). I’m also slowly chipping away at a contemporary novel, which is turning out like a semi-surreal on-the-run story.

A: I’m grateful for the chance to talk about Groupies with you on this wonderful blog.

I love connecting with readers and chatting about books! I can be found on Instagram at @sarah.priscus, on Twitter at @sarahpriscus, or on my website, sarahpriscus.com.