Holly James is the author of the new novel Nothing But the Truth. She lives in Southern California.

Q: What inspired you to write Nothing But the Truth, and how did you create your character Lucy?

A: I got the idea for this book in the late summer of 2020 when I’d been working from home for about five months. I realized how much happier I was not going through the routine of doing my hair and makeup to get ready to go into my office and being able to wear much more comfortable clothes all day.

That realization made me wonder why I had ever gone through that process in the first place. Where did those expectations come from? What would happen if I stopped complying?

Around that same time, my husband was one day randomly watching the Jim Carrey movie Liar Liar, and it struck me how different that story would be if it was about a woman and all the lies that she couldn’t tell in daily life.

The two ideas merged, and a story was born about a woman unable to lie to herself or anyone else about all the societal expectations women put up with just to get by in life.

I wanted Lucy to be relatable to readers and someone who they’d want to be friends with. Importantly, I didn’t want her to need to be taught a lesson about morality because she was cruel. I aimed to have her come across as an everyday girl confronted with everyday obstacles.

Q: The writer Jodi Picoult said of the book, “I picked up this novel on a week when I was made painfully aware of the gender roles women are forced into by others, and it was the balm for the soul that I needed.” What do you think of that description? 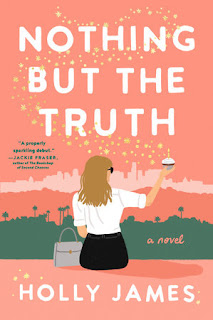 A: I’m still pinching myself that Jodi Picoult even read my book. This is the message I most hope that readers get out of Nothing But The Truth. I wanted to tell a relatable story about all the challenges women face, big and small, and have Lucy come out on top. If anyone can find hope or empowerment or even just a few moments of joy, that’s more than I can ask for.

Q: What do you think the book says about truthfulness?

A: I think it says several things about truthfulness. It shows how often we don’t tell the truth, even to ourselves, and all the consequences that can have. It also shows that telling the truth can be difficult and sometimes frightening, even when it’s the right thing to do. Ultimately, I think it shows how truthfulness can cause changes for the better.

A: I rarely know how a book ends when I start writing it! I am a total “pantser” and just make it up as I go along, following the story wherever it takes me. I generally get an idea for the hook, the main character, a few pivotal scenes, and then just start writing. I know the ending when I get there!

Over the course of writing Nothing But The Truth, the story largely stayed the same from first to final draft. The only changes were the “rules” of the magical wish and some of the big scenes got reordered.

A: My next book, The Deja Glitch, is currently in copyedits. It will be out with Dutton summer 2023. It’s another lightly speculative rom-com set in L.A.

This story has a much larger romantic element and centers on two people stuck in a 24-hour time loop where they have to fall in love to break out. The problem is, Jack can remember the entire loop, and Gemma feels like every day is the first day they’ve met.

It has more entertainment industry shenanigans, the best best friend ever, and a book boyfriend worth swooning over! Aside from that, I am also drafting a potential book three.

A: I am thrilled to have Nothing But The Truth finally out in the world. I wrote this story almost two years ago during the thick of the pandemic. It’s not an overstatement to say that the world has changed since then, and I am so excited to be able to put a hopeful, empowering, joyful book into the hands of readers. Thank you for the chance to share!