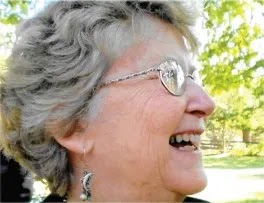 Selby McPhee is the author of the new book Making It Up: The Vassar Class of '65 on the Cusp of Change. She also has written the book Love Crazy. She lives in Potomac, Maryland.

Q: What inspired you to write Making It Up?

A: I have been thinking about this book since 1987, when reunion planners gathered groups of women from the Vassar Class of ‘65 to identify themes for our 25th reunion. I attended the Boston meeting and discovered there that all of us were surprised, even a bit shell-shocked, by the unexpected course our lives had taken.

We had arrived at Vassar as ‘50s girls, anticipating that after a good college education and maybe a few years of work, we would live domestic lives as good wives and mothers. It was the role our mothers had assumed and that we had been trained for.

But American culture was turning upside down, churning with revolution on behalf of civil rights, the war in Vietnam, the environment—and a revival of the women’s movement—just as we graduated. So each of us found ourselves inventing our lives—making it up—with new rules for living, new expectations, and no guideposts for the decisions we were making.

I began to understand that the 1950s, a sleepy, retrogressive decade of recovery from war and Depression, had shaped us for a world that no longer existed—that we were an age cohort with a unique challenge. I wanted to write about that.

Q: What impact did your years at Vassar have on your life in subsequent decades?

A: Though Vassar didn’t offer us support in building careers, there were plenty of examples on the faculty and in the administration of independent women: successful, strong, self-confident academics with agency and power.

Those women, and the male professors, expected a lot of us, assumed that we were destined to have an impact on the world, and gave us voice in our single-sex classes. It was a bit of a shock for us to have to work so hard to succeed academically at Vassar, and a shock to discover, in the workplace, that we, as women, were not taken very seriously.

Many of us think, though, that the Vassar name on our resumes helped us get jobs. It was just that after we got the jobs we realized no one really wanted our opinions… 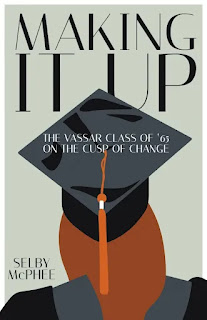 Q: How do you think the expectations of the class of ‘65 upon graduating differed from the reality as your lives unfolded?

A: I think most of us still expected to marry and run a household after a few years of work. The opportunities that opened up to us and the surprising emergence of our own ambitions to succeed, to advance in the workplace, drove us on. As time went by, the satisfaction that we were being acknowledged for our work in the larger world outside the home was intoxicating.

Ultimately, what was important was that we HAD choices; that was what felt so good.

A: My first thought was to just call it by its second title - The Vassar Class of ‘65 on the Cusp of Change. Then I thought about calling it Fifties Girls, which didn’t reflect where our lives went, then Midwives, which would have required me to prove how everyone I profiled was a “midwife to change.” That felt limiting.

Finally, I thought about how we all have been making up our lives, without role models, as we went along, and I settled on Making It Up.

A: Now I am writing memoir pieces that are generated by this stage of my life.

With help, I am taking care of my 97-year-old husband, who is in advanced stages of dementia. Anyone who has been a caregiver will tell you that this is a sad, difficult, taxing role to play, so I have been writing “caregiver chronicles” under an alias, to protect my husband’s privacy, so that I can share my experiences with others in the same circumstances.

Also, as I go through closets and boxes in an effort to unburden myself of “stuff” at this transitional stage, I have been writing memoir based on the things I find and the memories they stir up.

A: There are so many stories I didn’t tell. I would like to figure out some way to continue a dialogue—perhaps a blog?—with other women from our age cohort and beyond. What have we learned that we can pass on to future generations of women?