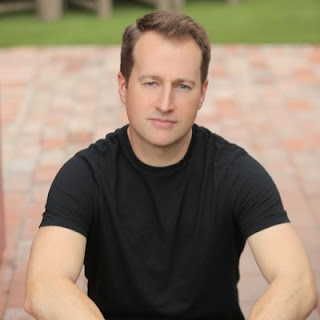 Joey Hartstone is the author of the new novel The Local. A film and television writer, his work includes writing the films LBJ and Shock and Awe. He lives in Los Angeles.

Q: What inspired you to write The Local, and how did you create your character James Euchre?

A: A good friend of mine named Nathan Speed is an intellectual property lawyer from New England.

When he told me that his work often takes him to a small town in East Texas, I was intrigued. When he explained to me that Marshall was the largest venue in terms of patent infringement cases, I knew I had stumbled into a good backdrop for a story.

And when he explained that there are Texas trial lawyers whose specialty is joining out-of-state legal teams to serve as an interpreter of sorts between corporate clients and local juries, I knew I had a character. 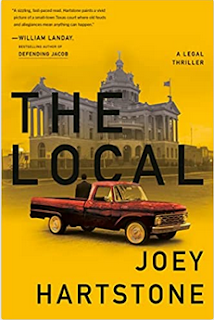 A: I definitely outlined the entire story, though it’s having a good plan that helps free me up to try new things while I’m writing. Ultimately, the end of the story was always pretty firm, though I found a new setting for that ending while I was writing.

Q: Some of the reviews of the book compared it to the work of John Grisham and Scott Turow--what do you think of those comparisons?

A: I’m flattered beyond belief to be mentioned in the same sentence with Grisham and Turow. As a screenwriter, my first love is movies. I was sort of a weird kid, so rather than growing up on Star Wars and cartoons, it was The Firm, Presumed Innocent, and great courtroom dramas and legal thrillers that made me fall in love with storytelling.

Q: How did your writing process for The Local compare with your work for TV and film?

A: The process wasn’t terribly different. I brainstormed, researched, outlined, and wrote.

The biggest difference was in the rewriting. I got great direction and notes from my agent, Rachael Dillon Fried, and my editor, Rob Bloom, but the notes were far less demanding that they can be in screenwriting. My wife, Abby, was the most important creative contributor to the work, as she always is.

But only a small handful of people weighed in. That’s not the case when producing a movie or TV show. So it did feel that, for better or worse, this book represents me more than anything I’ve written.

A: I’m currently the showrunner on Showtime’s second season of Your Honor, starring Bryan Cranston. I’m staying in the legal world for a while longer, which is perfectly fine with me.

A: As far as the future for The Local, I hope to write more installments, as well as develop it as a TV series. I truly love these characters and this story, so I hope I get to continue writing it.