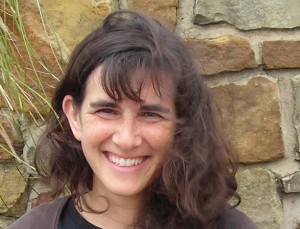 Madelyn Rosenberg is the author of One Small Hop, a new middle grade novel for kids. Her many other books include Not Your All-American Girl. She lives in Northern Virginia.

Q: Why did you decide to focus on climate change in your new novel?

I wrote around it in one of my Nanny X books, where the kids are trying to save a park. I wrote about it head on in a couple of picture books (Happy Birthday, Tree and Take Care, which is about taking care of the world). And I wanted to tackle it head on in a middle-grade novel, as well.

I wanted to write something set in the future, too, and that’s how this book came together. I think about the topic a lot, along with the kids who are inheriting what we’re failing to care for. 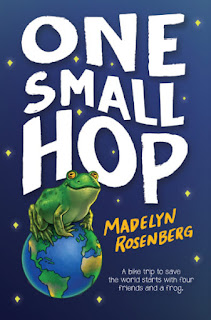 Q: The Kirkus Review of the book calls it "In turns adroitly funny and heartbreakingly sad but ultimately inspiring." What do you think of that description?

Q: How did you create your cast of characters?

A: I started with Ahab and his father, and then I gave Ahab the people I thought he needed in his life.

Sometimes characters just come out fully formed. Sometimes they start out modeled after people I know, in bits and pieces, anyway. My best friend from college times a friend from high school minus the ‘80s hair. That gives them a sense of being, until they find their own voices somewhere a couple of thousand words later.

But if I had to pick one thing, it’s this: I hope readers will take away a sense of purpose – their own purpose, whether it’s taking care of the world or going after something else they believe in. And I want them to love frogs, of course.

A: I’m working on a few different things, but they’re all in the if-I-say-this-out-loud-I-might-jinx-it stage.

I will say that I usually try to work on stories of varying lengths, so I don’t get confused with voice when I go back and forth. I’m typically working on a picture book and a middle grade at any given time.

A: We have a small pond with an extended family of frogs in it now, and a ton of tadpoles. When we first moved here and I heard them out back, I had no idea what was making the sound. It was late at night and I jumped! The next year, we didn’t have any. I was so glad when they returned!