Scott Shepherd is the author of the new novel The Last Commandment, the first in his Austin Grant of Scotland Yard series. His other books include The Seventh Day. A longtime television writer, producer, and show runner, he teaches television writing at the University of Texas in Austin.

Q: What inspired you to write The Last Commandment, and how did you create your character Austin Grant?

A: This was one of those ideas that had been floating around inside my head for almost 30 years — and started off as a movie with the thought of having two fish-out-of-water cops working with each other, with the young NYPD cop falling in love with the Scotland Yard man’s daughter.

I never wrote a word of it as a screenplay and I think that was a good thing, because back then, it was sort of conceived as a more oil and water/don’t get along relationship, but by the time I sat down to turn it into a novel, Frankel was less hardened and more insular, someone still getting over the breakup of his marriage.

As for Austin Grant — at first thought, I was thinking of someone like a 60-year-old Sean Connery playing him in a film, and by the time I started writing the novel 30 years later, I kept thinking of the actor Edward Woodward at that age who I’d written for on The Equalizer back in the day — and he was the sort of proud but cerebral British fellow who I would tell that we weren’t working on the 4th of July because it was a holiday here in the US and he replied, “Oh, my dear fellow, we celebrate that holiday in England as well.”

That sort of informed his sense of humor and it went from there.

Q: Did you do any research to write the novel, and if so, did you learn anything especially surprising?

A: I’m not a big researcher, I basically (as a good friend put it) like to make up stuff — so I really only do it where necessary. I did look at a chart of the hierarchy for both Scotland Yard and the NYPD to make sure I had both Grant and Frankel’s ascension to their ranks in place.

The kind of research I found myself doing was when I came up with the ideas of certain locales for a couple of the murders — like the shut-down Neponsit hospital in Far Rockaway. Frankly, I decided to set a murder there because it’s where my brother-in-law’s from and he’s always saying how rough and tumble it was growing up there and I wondered if there was a cool place to set something. 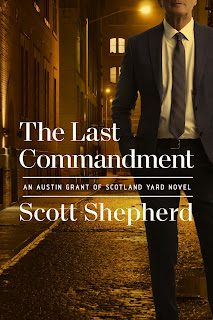 Likewise, when I decided to end up on the Matterhorn, I looked at some maps to figure out how to get everyone to the top and the ice palace was something I’d heard about, and then made it work for the denouement of the novel.

A: I didn’t know a ton when I started out, but I absolutely knew who the killer was, why he was doing it. But with the exception of the opening murder (in the book — #3) with the rock and roller killed in the alley and the final one, I had no idea what the other eight murders would be — but luckily had the idea of the Ten Commandments to give me a place to start and figured out things from there.

Q: The Kirkus Review of the book says, "A serial killer seems to be taking his cues from Agatha Christie and Ellery Queen." Did you model the book on classic mystery novels?

A: I’ve read thousands of mysteries, starting in grade school, and taught a course for three years on The Detective Novel when I was an undergraduate at Stanford decades ago.

The reading list was Poe, Doyle, Christie, Sayers, Queen, Stout, Hammett, Chandler and MacDonald — so I guess you could say that some of my plotting instincts are rooted in that classic literature.

Then, I think I put the idea aside a couple of times over the years because of films or novels that had a similar structure — first it was Seven with the crimes being committed according to the Seven Deadly Sins, and then years later The DaVinci Code in terms of trying to follow a pattern/puzzle of clues from something classic to figure out the mystery.

There was also a writer named Lawrence Sanders who wrote best-selling potboilers back in the day like The First Deadly Sin and then a series of books like The Tenth Commandment and The Fourth Commandment that were inspired by one commandment each — and that probably got me thinking what if there was someone killing people according to all 10.

But in the end, the commandment trail is really an engine to provide a background for what is at the heart of the book and that is the relationships between Grant, Frankel, and Rachel.

A: I just turned in the sequel to The Last Commandment to Otto Penzler and Mysterious Press and it’s being copy-edited now for publication in July 2022. It’s called Till Death and takes place six months after the first book.

The aim (and hope) is for this to be a long series of books, with one coming out each summer — and I’m already noodling around with what the third will be, and will probably dig in on that soon.

At the same time, I’m working on a TV reboot of Stephen King’s The Dead Zone (a series I ran years ago) that we’re in the process of trying to get set back up.

And there are a couple of other ideas I have for different novels, but right now, I’m pretty revved up about getting the Grant and Frankel series up on its feet.

A: Nothing particular comes to mind. I’d like to get my golf game out of the high 80s and low 90s where it’s been hovering during the pandemic, but I’m enjoying all the exercise it’s provided during that time and I’m nervously anticipating the response to The Last Commandment and I hope we get enough eyeballs on it, because I really would like to keep writing about these characters for years to come!