Carol Goodman is the author of the new novel The Stranger Behind You. Her many other novels include The Sea of Lost Girls. She teaches at The New School and at SUNY New Paltz, and she lives in the Hudson Valley.

Q: What inspired you to write The Stranger Behind You?

A: There were a number of threads that began this book, but the moment that stands out was hearing Dr. Christine Blasey Ford describe the “sequelae” of being sexually assaulted.

I recognized the symptoms she described—anxiety, claustrophobia, panic attacks—from my mother, who had been sexually assaulted when she was a teenager. I realized, then, that my mother had suffered from these post-traumatic stress symptoms all her life.

At the time, the news was full of women coming forward with their own stories of sexual assault and harassment and it made me think of previous generations who had these experiences but had no recourse or anyone they could really talk to about it.

It made me want to write something about a woman of another generation living with that aftermath and being “stuck” in that awful moment alongside a story of contemporary women dealing with the aftermath of assault.

The second inspiration came when I read an article about Michelle Jones, the historian who researched the history of women’s prisons and wrote about a Magdalen Laundry in Inwood, a neighborhood in Manhattan where my husband lived for many years and my daughters live in today.

I was shocked to learn that there had been Magdalen laundries in this country and that all memory of the institution seemed to have vanished from the neighborhood. 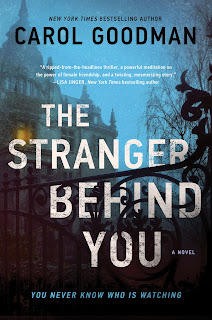 This seemed like the same kind of erasure as my mother’s experience and it created the setting of the book—an apartment building in an old Magdalen Refuge where my modern heroine would go seeking safety.

Q: Much of the novel takes place at The Refuge, an apartment building in Manhattan. How important is setting to you in your writing?

A: Setting is very important to me.  I can’t really begin a book until I know where it’s set.

As soon as I learned that there had been a Magdalen Laundry in Inwood I was fascinated by the idea that such a place existed in northern Manhattan in a neighborhood I was familiar with.

The building itself was described as quite grand—like a French Chateau—and I could imagine it being transformed into a luxury apartment building called “The Refuge.”

I loved the idea of setting the story in Inwood, a vibrant multicultural Manhattan neighborhood with a rich history, on the banks of the Hudson River which, to my mind, connects this novel to the books I’ve written set in the Hudson Valley.

A: There was a lot I didn’t know about what would happen in the novel when I began.

I don’t make an outline and I usually figure out the story as I write it, beginning with a character telling a story about something that’s happened to them. I follow that voice until I know enough about the story to begin and I’m often surprised by where the writing takes me.

One of the first surprises of this book, which I began in Joan’s voice, was realizing that I needed Melissa’s voice to tell the story as well. For one thing, Joan was kind of stuck in that apartment and I needed someone who was getting out more!

As I began to write from Melissa’s point of view I had to tackle the question of complicity for a woman who learns that man she’s loved and lived with for years is a sexual predator. I really wasn’t sure how I’d settle that question with Melissa. I had to write in her voice to find out.

As for the end, I did have an image of the last two important scenes in the book—I just didn’t know entirely how we would get there!

A: I always hope my readers are absorbed enough by my story to forget their own troubles for a little while, a quality that I’ve come to especially appreciate during this last year.

For this book, I hope they also reflect on all the stories they may not know, stories of our grandmothers, our mothers, our sisters, our daughters, our friends. I hope this book encourages them to listen for those stories.

A: I’m just finishing a novel about a group of friends who go to an island off the coast of Maine where they have to reckon with their own shared history as well as the violent and mysterious history of the island itself, which includes a pre-colonial witch execution and the arrival of “fever ships” from famine-stricken Ireland in 1848.

A: One of the most enjoyable parts of writing this book was researching for the 1940s storyline, which features Lillian Day’s character.

Lillian's based loosely on my mother (my mom really did know the Kiss of Death Girl and Abe Reles) but her character required some additional background (my mother didn't actually help the D.A.'s investigation) so I read some great books of the ‘40s and about the ‘40s, including Women Crime Writers: Four Suspense Novels of the 1940s (edited by Sarah Weinman), which contains Laura by Vera Caspary, The Blank Wall by Elizabeth Sanxay Holding, and In a Lonely Place by Dorothy B. Hughes; books about organized crime, such as Murder, Inc. by Burton B. Turkus and Sid Feder, Dark Harbor by Nathan Ward, Public Enemies by George Walsh, and The Canary Sang But Couldn't Fly by Edmund Elmaleh; and these great 21st century neo-noirs: Manhattan Beach by Jennifer Egan, Laura Lippman's Sunburn, and Megan Abbot's Die a Little.

I loved this research so much that I'm thinking of setting my next, next book in the 1940s.