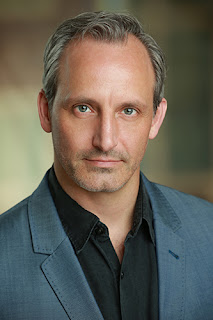 Glen Erik Hamilton is the author of the new novel Island of Thieves, the sixth in his Van Shaw series, which began with Past Crimes. He lives in Seattle.

Q: This is your sixth Van Shaw novel. Did you know from the beginning that you’d be writing a series, and how has he changed over the course of the six books?

A: Not from the very beginning. In the first draft of Past Crimes I was picturing Van as a bit more of an antihero--or at least a very unpredictable protagonist--and I wasn't even sure if he'd survive to the end.

It only took about a third of a manuscript to realize that wasn't the character I wanted to create. Van had to be someone actively finding his moral center, as challenging as that might sometimes be.

And I loved writing the supporting characters like Hollis and Addy Proctor and Luce. I wanted to visit them again, see them interact in different combinations, and have them evolve along with Van.

He is most definitely changing. He's no longer the Army Ranger fresh from combat and uncomfortable with stateside life. But he's channeled that vigilance and dedication into extralegal—if not fully criminal—activities. Van knows he's at his best when dealing with trouble. The danger for him is that he might not be able to feel alive without those dangers.

Q: What inspired the plot of Island of Thieves?

A: There's a tremendous amount of foreign capital flowing into Seattle. As with any river, a sudden surge can be a godsend or a disaster depending on where you are on the shore.

I wanted to explore that, and also to thrust Van into the world of the elite. He's got a chip on his shoulder where rich people are concerned. He'll sometimes tweak them just to prove he's not impressed. Maybe he's proving that to himself.

I'm also fascinated by the maneuverings of corporations and governments when it comes to intellectual capital. Scientific innovations can be as valuable and as closely guarded as any national secret. And where there are secrets, there are spies. Where there's money to be made, there will be thieves. 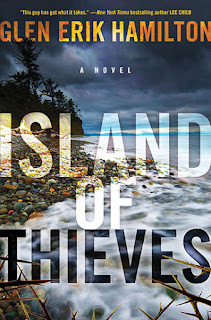 A: Being vague to avoid spoiling a major plot point: Looking for a MacGuffin that could be relatively portable, I foraged through a lot of articles predicting potential breakthroughs in chemical industries. It didn't take long before I was completely over my head.

Fortunately, I have a friend who knows her way around a laboratory. She was able to walk me through the specifics and, working together, we solved a couple of feasibility questions and came up with a twist that was very viable for the real world and very fun, plot-wise.

And I'm always researching crime. To answer what surprised me, it was not only how intense some agencies are in their quest to obtain an industrial advantage--by any means necessary--but how open a secret their efforts are. Everyone involved seems to expect at least some level of skullduggery.

Q: The Publishers Weekly review of the book says, “Hamilton’s fast-paced plot never loses its way despite numerous jaw-dropping twists.” What do you think of that description?

A: It's a nail-gnawing time, waiting for the first reviews of a new book. Island of Thieves especially so. The story required me to flex different writing muscles. It's the first Van Shaw novel written in third person, which allowed me to break away from Van's point of view to show what other characters are doing and thinking and what traps may lie ahead for our hero.

I'm delighted that the twists surprised the reviewer and absurdly relieved that they found the book an exciting read.

A: Our family is in the midst of moving back to my hometown of Seattle, so writing has been temporarily suspended in favor of packing boxes. Many, many boxes.

But while my hands are busy with bubble wrap and strapping tape, my mind is noodling on a standalone thriller. Something fast and tightly focused. No more than six or seven characters.

Once we've settled into the new place, I'm looking forward to burying myself in the writing for a month or three. That's usually how I fight through the first draft, letting the momentum and a rough outline carry me along. It'll be my first standalone and the first book I've written start-to-finish in Seattle, which feels right.

A: Like most everyone else I know, I'm aching to get out into the vaccinated world. That most definitely includes mystery conventions, bookstores, writers’ conferences, et al. The conversations and camaraderie that make all those hours at the keyboard worth the effort. I want to engage with other writers in the Northwest, and more than that, I want to encourage others to join as well.

So, for those of you reading this: if you've thought about beginning to write, or you're already writing but haven't tried a new path or group for a while, go for it. What better time than now? I hope to see you at a convention soon!