Andrew M. Nehring is the author of David Massie and the Quantum Flux, a new middle grade novel for kids. His other books include the Corrupted Light Chronicles series.

Q: What inspired you to write David Massie and the Quantum Flux, and how did you create your character David?

A: The inspiration for David Massie and the Quantum Flux came from my childhood. As a child I was absolutely obsessed with franchises like Star Wars, Star Trek, and anything in the realm of sci-fi and fantasy. I would always imagine myself in that universe.

So when I was in college I felt this overwhelming need to write a sci-fi series, but based in the world we currently live in, with an expansive universe and awesome characters.

As for the creation of David Massie himself, most of his character just came to me out of nowhere and I knew I had my main character. 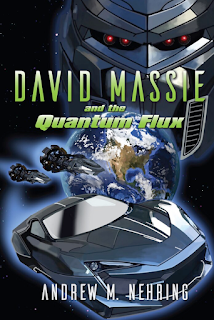 A: Yes, for David Massie and the Quantum Flux, I mapped out where I wanted the story to go for the next three or four books. Whereas for my other series, Corrupted Light Chronicles, I wrote the first book, then made changes, then mapped out the next couple of books.

But for David Massie I know where the story is going; granted there is still a lot more room to add to the story since I am on the first of many books.

Q: How would you describe the relationship between David and your character CP?

A: The relationship between the two is like a mentor/mentee. CP not only acts as David’s protector, but also a mentor for David. David is realizing the universe is much different than it appears, and CP is helping guide him through the complexities of his newfound reality.

Though CP is his mentor, the two have a lot of sarcastic banter. They have a mutual trust and understanding of the goal; they also know the two can rely on each other when needed.

A: I want readers to have a fun time reading my books, feel excited for the next, and surprised by the ending. As far as what I want my readers to take away from my book is through failure there is opportunity for success, and to achieve it you need perseverance.

A: Currently I am working on Corrupted Light Chronicles Book 3, David Massie book 2, and a completely new series that I’m trying to have be made into a graphic novel. I am still in the beginning stages with that, though.

A: That you never know when a mysterious Dark Armored figure is around.