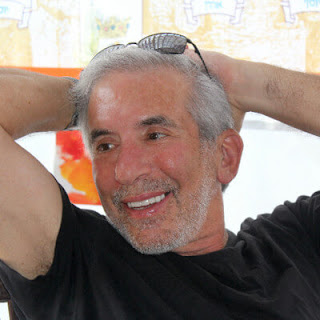 Michael S. Tobin is the author of the new book Riding the Edge: A Love Song to Deborah. It focuses on his relationship with his wife, including a six-month long-distance bike trip they took in 1980. He is also a clinical psychologist.

Q: You note that you started writing a version of this book in 1988. How did it change over the years?

A: Riding the Edge has gone through a number of iterations from its inception in 1988 until its 2021 grownup version. It’s taken 40-plus years for me to understand the seismic impact this brief, six-month journey had on Deborah, myself, and our relationship.

When I look back at the earlier versions, my voice was lacking authority and conviction. In this version, I wrote from my heart as well as my mind, driven by an inner necessity that I hadn’t experienced with the previous versions. Without giving away the ending, what happened to my wife inspired me to complete the book.

A: The title, like the book itself, has evolved over the years. After toying with a number of titles that more or less conveyed the sentiment of the book, I landed on Riding the Edge.

Riding because a significant portion of the story takes place during a 3,000-mile bicycle odyssey. The Edge in order to convey the sense of emotional, physical, and spiritual intensity that we experienced. 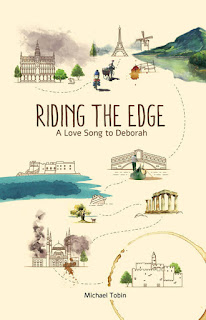 The subtitle, A Love Song to Deborah, came to me as an epiphany. I had been struggling to find a descriptive subtitle that would express the narrative arc. Everything I came up with, and everything that my friends and editor suggested, sounded uninspiring, safe, and heady. I wanted edgy and transparent.

So, in August 2020 I was in the midst of a guided psilocybin experience when the subtitle came to me. I immediately cried—for me, the only proof I needed that A Love Song to Deborah expressed the truth that had been eluding me. I shared it with everyone who had read the manuscript. They cried.

Judaism as an identity plays a significant role in the story, especially between Deborah, an Arab American, and me, a disconnected American Jew with an ambivalent relationship with being Jewish. I don’t address questions of religious observance.

Q: How would you describe the relationship between you and your wife?

A: Since you don’t specify a time frame, I assume you mean currently.  However, I’ll answer both then and now. Then being the six-month period from May through November 1980 when the story takes place.

Prior to our bicycle trip, we had been living together for five years. During that period of time, we completed our doctorates in psychology, created vibrant therapy practices, and were relatively affluent. However, there was something indefinable missing from our relationship with ourselves and with one another.

As John Steinbeck wrote, a journey has a mind of its own and heart that disrupts and our odyssey was no exception. The trip exposed the fault lines and strengths in our connection.

When we were in Paris, the relationship began to unravel so quickly that an impulsive decision or a moment of jealousy might have ended it for good. A significant portion of the memoir focuses on how we came through a number of large and small crises to develop a true soul-to-soul connection.

My love, respect, and admiration for Deborah has grown through the years. She was and continues to be the most extraordinary person I’ve known. She’s taught me how to love, how to be the best version of myself, and how to accept with grace and dignity whatever life throws at us, and, at this stage in life, Fate, the Universe, or God has tossed us a few curve balls. (No more details since it’s how the book ends.)

I am blessed to have spent the last 47 years with Deborah. Together we’ve raised four children and 14 grandchildren. She is my soulmate, life partner, and the only woman I’ve ever loved.

A: I have a very interesting writing style. I write stories in my head until I’m bursting. Then, when I can no longer contain the words, I let the keyboard express what my mind creates.

So, currently I have two ideas for future books. One is a wild idea about a sequel written in the style of Hunter Thompson’s Fear and Loathing in Las Vegas that borders on the insane. If I can pull it off, it will make for a dynamic, absurd, and inspiring story.

The other is a novel loosely based on a real story of a Vietnam vet I knew, his parents, both survivors of Auschwitz, and his therapist, an uprooted Israeli traumatized by his experiences during Israel’s War of Independence.

A: There’s a Talmudic quote that says, “What comes from the heart, penetrates the heart.” Riding the Edge, A Love Song to Deborah poured out of me from some inexplicably deep place. In fact, it was such a powerful torrent of ideas and emotions that the first version was 580 pages long.

I wrote like I was tripping on a cocktail of steroids and amphetamines—unfiltered and raw. I had to learn to “kill my darlings” to find the story within the noise. Kind of like life itself where we struggle to discover a unifying theme among all the seemingly disparate facts that constitutes our lives. It’s how we create meaning.

My greatest wish is that Riding the Edge, A Love Song to Deborah inspires the reader in some small way to discover significance in his or her life.