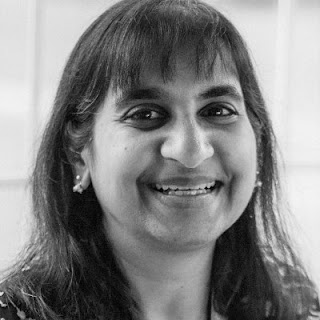 Jyotsna Sreenivasan is the author of the new story collection These Americans. She also has written the novel And Laughter Fell from the Sky. She lives in Columbus, Ohio.

Q: On your website, you write, "These Americans explores what it means to live between Indian culture and American expectations." Can you say more about that?

A: Children of immigrants (the second generation) often experience this pull in two different directions.

Their parents want them to identify with the ancestral culture by speaking the language, eating the food, wearing the clothes, loving the music, and/or adopting the values, of the country they came from. But the children raised in the U.S. often identify as Americans, and may not even know much about the country their parents came from.

For example, in my story “At Home,” a 7-year-old girl is caught between her parents who want her to be proud of being from India, and her classmates, who shy away from her Indian accent and diction. Once this girl has developed a Midwestern accent and found some friends, she hates any reminder of India, a reminder that she is “different” and, perhaps, doesn’t belong.

In another story, “The Sweater,” a college student is caught between her immigrant parents’ expectations that she will single-mindedly study hard and excel at college and career, and her own wish to take time to explore what she really wants to do. Indian immigrant parents tend not to value the freedom to explore, but that is a very American value, I think.

Q: You've said that the book's title came from a phrase your parents used to describe non-immigrant Americans. How did it come to be chosen as the book's title, and what does it signify for you? 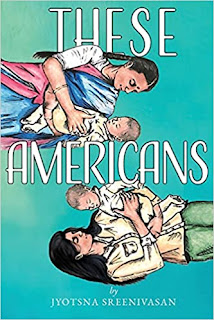 A: I definitely wanted the word “American” to be in the title. I wanted to make the case that immigrants and children of immigrants are Americans.

The original title was “The Americans,” but then I found out that there was a TV show called “The Americans” that was about Russian spies! So I couldn’t use that title.

I looked through the book to see what phrases popped out that included the word “American,” and the phrase “these Americans” came up a lot. It was always a phrase that an immigrant character would say to distinguish themselves from mainstream Americans.

For example, “I have gotten used to these Americans smiling all the time,” says a newly arrived immigrant in the story “Mirror.” In the story “Dreams,” father of a troubled teen declares, “These Americans are always running to counselors, and still they have problems.”

“Mrs. Raghavendra’s Daughter” is a story about a mother who wants to arrange a marriage for her Ohio-raised daughter, and she laments that “these Americans didn’t trouble themselves to find spouses for their children.”

When I was growing up in northeastern Ohio, I cringed when I heard my parents say the phrase “these Americans” because I felt like my parents were subtly criticizing not just some random American out there, but that they were disapproving of me, because I identified as American.

So I think the title asks the question, Who are “these Americans”? Aren’t immigrants and children of immigrants true Americans? I hope the book helps readers—whether they are immigrants or not—explore what it means to be American.

Q: Over how long a period did you write the stories in These Americans?

A: The stories were written over the course of about 15 years. I also wrote several other stories during that time that did not make it into this collection.

In the novella which ends the book, the second-generation daughter is in her 40s, and is grappling with her aging, ill mother.

A: In addition to thinking about what it means to be American, I hope people will be able to empathize with the feeling of being pulled in two different directions, or feeling like you don’t fit in. I think we have all had that feeling, whether we are from an immigrant family or not.

I don’t want this book to be seen as only a “multicultural” book. I hope readers of all backgrounds will be able to find connections with the characters.

I have also created a free five-week lesson plan for middle school and high school teachers, about immigration, the American Dream, and what it means to be American, as seen through the eyes of second-generation characters. This lesson plan can be downloaded from my website.