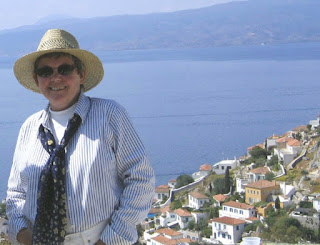 Judy Scott is the author of the new memoir Leonard, Marianne, and Me: Magical Summers on Hydra. It focuses on her experiences on the Greek island of Hydra, including her friendships with the singer-songwriter Leonard Cohen and his partner, Marianne Ihlen. Scott spent many years in the independent film production and distribution business, and she lives in Los Angeles.

A: I had kept fairly extensive journals during my time living on Hydra in 1973 and 1975 but had not intended to do anything with them until I was approached in 2015 by another Hydra ex-pat, Kevin McGrath, who is also a writer and teaches at Harvard, about a compendium he was putting together of various writers and artists who were a part of the expat community in the 1970s and 1980s on Hydra.

When I first became acquainted with Leonard Cohen, in 1973, he warmly welcomed me into his home with [his partner] Marianne and her son Axel, and asked just one thing, "Please don't write about us."

So I sent him an email and told him about the project and asked if he would look over what I had written and let me know if he had any objections to my submitting it to the group project.

He wrote me back the next day and what he had to say really motivated me to do a much longer piece on my own. He wrote "Dear Judy, Thank you for sharing this very fine piece of work for which I have no objections whatsoever... It was so touching to read about some of our old friends and I truly admire the detail and honesty of the piece."

My book was begun as a stand-alone piece seriously in early 2015 and completed and represented to the publishing industry by a literary agent in 2019. 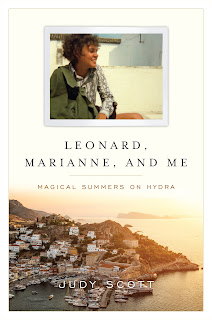 Q: Did you need to do any additional research to write the book, or did most of the research come from letters you had saved and from your own memories?

A: Although I always was interested in all things related to Leonard Cohen, I did not do any research for my memoir. It is exclusively a product of my experiences with Leonard, Marianne, Axel, and our mutual friends from the time I lived and visited Hydra.

I was very fortunate to have obtained permission from Marianne's estate to publish her letters to me and they kindly returned my letters to her (she kept all her correspondence).

Some of that correspondence did trigger some recollections that were included in the book, but for the most part, the diaries and journals I kept at the time were the source material for the book.

A: I was fortunate to establish quite quickly, a very intimate, almost familial relationship with Leonard. He was very open and candid in all our discussions and conversations about our lives, relationships and opinions on all kinds of subjects.

He also enjoyed my singing and would invite me to join him in songs he was working on at the time. I ate dinner with them almost every evening while he was there. Marianne herself said to me (as I quote in the book), "It almost scares me how close you've become to all of us, it's almost like you're a part of the family."

Q: How would you describe the impact the island of Hydra had on your life?

A: I would describe it as a life-altering and very profound impact. Not just because I was lucky enough to have developed a special bond with a musical and poetic genius, which Leonard Cohen was, but because the island itself, which is an important character in my book, is a very special, magical place.

There is a beauty there, and an atmosphere there, which is at once intensely energizing and somewhat provocative and at the same time, almost spiritual in its tranquility and overwhelming sense of the eternal.

Henry Miller, in his book The Colossus of Maroussi, said it best: "Hydra is like the pause in a musical composition that allows the composer to proceed in a different direction ... After Hydra it is no longer about the destination, it is all about the path."

A: I am working on another memoir of my life in the film business, my previous work at a variety of jobs, and my large Irish American family in New Jersey starting in the early 1950s.

A: Just ask me; my life is an open book.