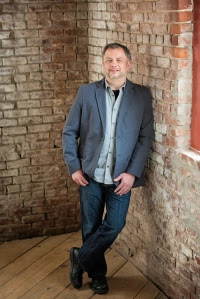 Q: What inspired you to write The Last Super Chef, and how did you create your character Curtis?

A: I was diagnosed with Parkinson’s disease several years ago, and The Last Super Chef definitely emerged from that experience, particularly the sudden doubts and worry about my future I went through. Am I still going to be able to this, or that, or this other thing over here? How much worse are these symptoms going to get and when?

The first character I developed was Lucas Taylor, the Super Chef. A TV personality who depends on his charisma and movements suddenly thrown for a loop when he receives the same diagnosis that I did.

But shortly after that, as I thought a lot about how we all view our roads ahead, Curtis Pith emerged. Different from the Super Chef, a confident kid with everything in front of him – Curtis has very specific goals about his future, more like his destiny. When we meet him, he’s one hundred percent positive he will become a famous chef.

I thought that conflict between the changing way Curtis was looking at his future and the changing way the Super Chef was viewing his would make for a really sturdy scaffolding to build this story against, and that’s when I was sure Curtis was the right lead for this book.

A: It might surprise readers of The Last Super Chef to learn I’m not much of a cook myself. Yet there I was, writing a whole book about a cooking competition. Most of my characters are very confident chefs, whereas I’m all thumbs in the kitchen.

So, yeah, I had to do quite a bit of research on the obvious stuff – recipes and cooking methods – but also a bunch of less obvious topics, too.

For example, each challenge the kids face has a prize associated with it, and a few are cooking related, like the special knife Kiko wins the first night the kids are in New York, or the “custom-crafted Molteni stove” involved later on. 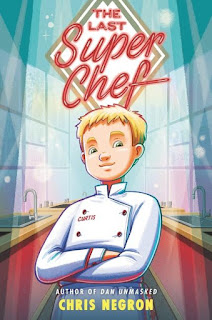 All that was new to me, but I’m such a big fan of chefs and cooking shows, I had lots of fun learning about and selecting the items I could imagine a real-world chef drooling over.

I also needed to learn a lot about how the cooking competitions work behind the scenes, especially when kids are involved. Though, to be honest, I didn’t want to just reproduce some existing show.

Super Chef the show was my own creation, and with that came the idea that I could make up my own rules for how it worked, even if a few were sort of “non-standard.”

I should say I had a lot of help, too. One critique partner of mine, Ivy Knight, is a former chef and now a food writer. She really helped steer me in the right direction when I got something in the kitchen wrong.

Other critique partners with television and film backgrounds set me straight on how shows like Super Chef probably work, and that really helped, too.

So my research was a combination of talking to other writers who had the right background, and lots of Googling and reading.

A: Interestingly, a lot of writers have trouble with their second book. A part of me wants to join the club, share in the struggle, but this book went mostly according to plan. It was certainly a lot easier to write than my debut, Dan Unmasked. That one felt like it went through never-ending revision.

That said, the ending did change slightly! The truth is that I don’t know if I could ever end any book without the help of my fabulous editor, Elizabeth Lynch. She always helps me hone in on the core of my characters and story.

For The Last Super Chef, mostly the spirit of the original ending remained, but the specific events and order of the climax did change a bit.

Not so much though – the evidence of that being that the two epilogue-like chapters at the very end hardly changed at all. That climactic scene, however, definitely didn’t come into full view in the right way until my editor helped me find Curtis a little better.

In early drafts, I think there was so much he was thinking and worried about, he came out a little scattershot. We had to do some work to simplify his goals.

After working on Curtis for a while though, and putting a lot more focus on what he wanted and why, the precise way a few of the scenes at the end of the book needed to go down became much easier to see as well.

We also changed the order of some of the challenges and the training the kids had to go through during the competition, including the prizes. These revisions really helped create a better feeling of escalation toward that updated ending.

A: As I‘ve hinted at already, this book has a lot to do with the future. How each of us has expectations for ourselves and the way our lives will go, in particular.

At the age kids are when they’re reading middle grade, they’re on the cusp of a lot of things. Some are already starting to look toward high school, quickly realizing that beyond that is maybe college, or the rest of life, and the “What do you want to be?” questions start up.

It seems to me we ask those questions earlier and earlier. I remember one of my nephews was asked in kindergarten! (True to form for him, he said, “Paleontologist.” And yes, even at 5, he pretty much knew exactly what that was.)

But not every kid is like my nephew, and this pressure on them to decide what and who they’re going to be really early, these attempts to slot them into a place or profession before they know enough to…well, know, comes from all sides. Parents and guidance counselors and society in general.

And, let’s face it, in some cases, it comes from the kids themselves. There are some young people who put far more pressure on themselves than anyone else could ever dump on them.

And listen – I’m a goal-oriented person myself, always have been – but I think I wanted to present a little bit of a different perspective about goals and expectations and flexibility concerning what’s ahead of you in life that I hope might give readers a fuller, more 360-degree view around the topic.

Hopefully this isn’t a spoiler, but near the end of the book, Curtis talks about the challenge of not always having a recipe, of having to be creative and roll with the punches, and it may be obvious that he wasn’t just talking about cooking there.

I hope watching him arrive to the conclusions he does about his road ahead – not just Curtis, but the Super Chef, too – will resonate with some readers.

A: I said my second book wasn’t as much of a challenge as my debut, but my third book has been a bit of a slog so far. Lots of starting and stopping and questioning my direction.

But I love the story, and lately I’ve been rolling through the first draft. It’s another middle grade novel, and this time, the main character, Mortimer, is struggling to honor the legacy of his mentor, who taught him all about protecting the people and streets of his city neighborhood.

A rich developer decides to build a mixed-use property on a vacant lot, and Mortimer has to find a way to stop him before the whole neighborhood changes.

I’d say more, but I’m not sure how much of what I’m building will change or survive.

There are two kid-run, rival dog-walking businesses, there’s gentrification and cultural identity and eminent domain and hidden history in a diverse neighborhood with a important location. There are lots of dogs and other pets and even a controversial rooster from Puerto Rico.

A: I’m having a virtual launch party! Hosted by the amazing Foxtale Book Shoppe in Woodstock, GA, it’ll be on July 6, 2021 at 7 pm, and everyone is invited. You can click here to get a free ticket: https://www.eventbrite.com/e/chris-negron-in-conversation-with-ivy-knight-virtual-tickets-153054256401

The only other thing is, some people might be wondering why I would say I wasn’t much of a cook and yet still have the idea to write this kind of book in the first place.

Here’s the thing: I’m always impressed with creativity and people risking a lot of themselves to do something daring and difficult. I also admire good sportsmanship and tough but friendly competitions.

That’s what I see when I watch cooking shows, and I hope I was able to put a little bit of my love of them “on the page” just like those chefs work so hard to put their art “on the plate.”

Most of all, I hope it’s a ton of fun for readers!