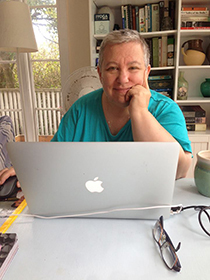 Cindy Rizzo is the author of the new young adult novel The Papercutter, the first in The Split Trilogy. Her other books include Exception to the Rule. She lives in New York City.

Q: What inspired you to write The Papercutter?

A: After the 2016 presidential election, I, like many people, was demoralized, and as the months unfolded I read a lot about how polarized the U.S. was becoming.

One statistic, about the rapid growth of so-called "landslide counties," stayed in my mind. These are counties where one presidential candidate, either R or D, won by over 20 points.

The percent of these landslide counties had greatly increased to the point where they comprised 60 percent of counties in the U.S. It began to feel like we were becoming two countries with separate news sources, television shows, and increasingly separate facts.

So in my most pessimistic moments I wondered whether the country would be better off to just split in two because it was becoming ungovernable. That "what if" thought took off in my mind, which led me to write The Papercutter.

Q: How likely do you think it is that the United States would actually split in two?

A: Right now I don't think so, but it depends on whether we continue to drift apart as a polarized nation or whether something or someone can unite us. 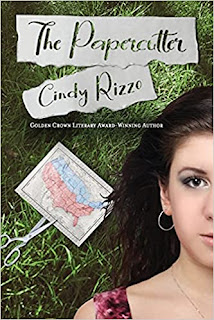 You would have thought a pandemic and an insurrection at the U.S. Capitol would have been such uniting circumstances. But alas, even those fell victim to polarized points of view.

I don't think it's inevitable, but I do think it's plausible. There are nascent efforts in some states to secede, and in Oregon several counties are trying to become part of the state of Idaho. These are worrying signs.

A: I'm not great at plotting, so the plot usually unfolds as I write. Typically, when I begin to write the last third of a novel, I can figure out the end.

Now with a trilogy (I'm in the middle of writing the second book) I have to be a bit more disciplined about how events will unfold and how the main characters' arcs will advance. So I now have some idea of all of that. I know the scene that will end book 2 and the scene that will begin book 3. That's a lot of progress for me as a writer.

Q: How did you come up with your characters Judith, Jeffrey, and Dani?

A: Judith and Dani came to me first because they are two visions of Jewish teenagers--one devout in her practice of faith and the other Jewish-identified but secular.

As each has developed they have become more nuanced. Dani is curious about religion though still a bit wary and Judith knows that she is not on the same path as her mother and older sister.

I thought matching them as pen pals was too obvious so I included Jeffrey, who was motivated to join the pen pal program so he could figure out a way to defect to the United Progressive Regions. Jeffrey's character as the cynical, funny, food-obsessed boy unfolded as I wrote him. I raised two sons so I have a special affection for Jeffrey.

Q: As you noted, this is the first in a trilogy--when can we expect the next volume?

A: I'm hoping to have the first draft of book 2 complete by the end of this summer, though that is ambitious. After that I'd like to give it to a few beta readers before I send it to my publisher.

I would imagine if I can keep to that schedule we might see the book get released by the second half of 2022. But that's for my publisher to decide.

A: I hope people who read The Papercutter will see it from many different angles--as a story told by three teens who are at a time of their lives when they are exploring issues of friendship, identity, and self-worth; as a book about Judaism and antisemitism; and as a story about resistance in the face of serious threats.