Gabby Dawnay and Alex Barrow are the author and illustrator of the new children's picture book If I Had an Octopus. Their other books include If I Had a Dinosaur. They are both based in London.

Q: What inspired you to write If I Had an Octopus?

GD: Alex Barrow and I had already worked on three books in the If I Had... series so it was really just the wonderful task of deciding which animal we wanted to explore as a “different kind of pet” next!

We'd written about having a dinosaur, a sloth, and a unicorn pet, so we felt it was time to return to a “real” animal, and one that was quite different to the others - perhaps lived in the ocean... an octopus!

It was a total delight to write about how our little protagonist would imagine having one of these awe-inspiring, intelligent and beautiful creatures in her life.

Coincidentally, the (now Oscar-winning) documentary My Octopus Teacher had come out last year, just as we were about to send the book to the printers and just in time to dedicate the book to Sea Change Project, the charity connected to the movie.

Q: What inspired the illustrations for If I Had an Octopus?

AB: It was a new challenge! I never really had drawn an octopus - if I had they were background features but not a lead role. The inspiration in octopi is they are a versatile device in a story with their eight arms. We brainstormed a lot imagining what it would be like if you had eight arms.

GD: As a kid I spent a lot of time in a world of my own, reading, writing, and drawing. I remember thinking how much I'd love to write (and illustrate) children's books when I grew up, but my life took several different turns before I eventually got there!

I now feel incredibly lucky to be doing something I love so much as an actual “job.” Working with a brilliant illustrator like Alex is a huge bonus (we've done over 10 books together so far).

We have a super-supportive editor and team at Thames & Hudson, so from initial idea to finished book, the whole process is even more rewarding when you're working with great people.

AB: I’ve always been passionate about children’s picture books - as well as working as art director on Okido (and arts and science magazine for kids). It’s been a big part of my life. And my life dream is to do children’s illustration for a living. 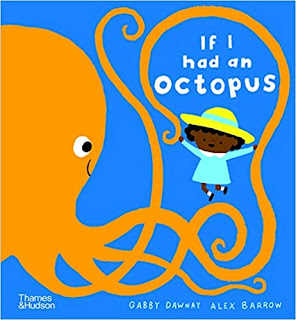 My final work at art college was a children’s book, so could say I stayed on the bus for a long time!

GD: If I Had an Octopus - all the books in the series - are about sparking kids' imaginations. Inspiring them to think about what it would be like to have an animal as strange and wonderful as say... an octopus in their life.

What would the possibilities and practicalities be? How would it work in every day, child-centric scenarios, such as school, playing sports and games, making dinner etc.

And we wanted to keep things really fun - to make them laugh and enjoy the silliness of these scenarios, too. And being a big fan of “accidental learning,” we tried to sneak lots of octopus facts into the story for kids to pick up along the way, without even realising it.

Because if children enjoy something, if you've engaged their interest, they are far more likely to want to explore further and find out more. So maybe that's what we want them to take away - a continuing curiosity about the natural world!

AB: I hope the story gives them a giggle and a thought on what it would be like to have a eight-armed pet.

GD: A few projects, including the next two titles in the If I Had... series - watch this space!

AB: On the next book, If I Had a Kangaroo!

GD: One of the best things - perhaps the very best thing - about writing children's books is seeing the books take on a life of their own and how kids respond to them.

If our books can bring even the tiniest bit of joy, a giggle, connection to or greater understanding of the world and the creatures in it, then our work here is done!

AB: It's a lot of fun working on the If I Had a series. It seems really natural how the series is progressing (and also a lot of fun to think of all the visual gags these various eccentric pets can do!).