Brad Parks is the author of the new novel Unthinkable. His other books include the novel Interference. A former journalist, he lives in Virginia.

Q: What inspired you to write Unthinkable, and how did you create your character Nate Lovejoy?

A: Really, I asked myself one question: What was the most terrible thing I could ask a character to do? Because I love my wife so much, the first answer to pop into my head was: What if he had to kill his own wife? I then began constructing a scenario where he might have no choice but to do that.

As for Nate, he’s a stay-at-home dad—much like I was for a time. Naturally, this is a thriller, so he’s being called on to save the world. And I figured the only thing harder than having to save the world was to do it with two toddlers in tow. 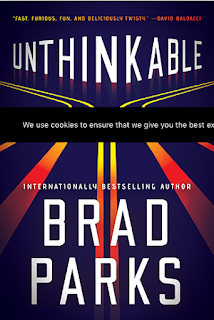 A: At some point in the writing, it struck me that I was calling on Nate to make an absolutely unthinkable choice. The moment I typed the word “unthinkable,” a little bell went off in my head. From then on, that was going to be the book’s title.

Q: The Kirkus Review of the book calls it "A textbook one-sitting read whose fiendishly inventive details only intensify its remorseless momentum." What do you think of that description?

A: It’s one of my favorite reviews of all time! Really, there’s nothing more—and nothing less—that I’m attempting to do than hook a reader so thoroughly that they feel like they simply can’t put the book down.

Q: In our previous interview, you said you did some research for your last novel, Interference. What about this one? Did you need to do much research?

A: There’s a bare minimum of research required in any book to make sure you get the details right. But beyond that, I’ve decided it’s mostly a form of procrastination. So I try to do as little as possible.

A: My next novel involves a newly discovered species of hominin that has been hiding in plain sight on a remote Pacific Island. I throw them into a bag with a team of paleoanthropologists, a CIA operative who is falling in love, and some special forces soldiers. What could possibly go wrong?

A: Just that I love what I do, and I’m grateful whenever a reader decides I’m worth checking out!