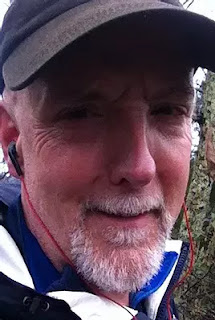 Earl Swift is the author of the new book Across the Airless Wilds: The Lunar Rover and the Triumph of the Final Moon Landings. His other books include Chesapeake Requiem. He is a fellow of the Virginia Foundation for the Humanities at the University of Virginia.

Q: What intrigued you about the later moon landings?

A: Well, in a word, their audacity. The idea of landing astronauts on the moon was breathtakingly bold in itself—the choreography of events necessary to send a spaceship nearly a quarter-million miles from Earth, set it down gently on a specific square of the moon’s surface, then get its crew back home, all while relying on computers stupid and slow by the standards of a modern desktop, still seems the stuff of fantastical fiction, a half century later.

But as impressive as all six of the landings were, the last three amazed on an entirely different level. Those missions aimed for longer stays in far more dramatic lunar locales, and they put their astronauts behind the wheel—well, actually, the joystick—of an electric car that vastly expanded the range of their explorations.

The lunar rover changed everything about Apollo. What looks, to our earthbound eyes, like a stripped-down go-cart was really a complex “spacecraft on wheels” that performed almost flawlessly on nine driving tours of the moon’s surface.

Crews of the first three landings together explored an area less than half the size of New York’s Central Park—a square mile, maybe. The rovers each commanded an area the size of Manhattan, and ventured to places that no astronaut on foot could have reached—hundreds of feet up the sides of mountains, along the rims of distant craters, across miles of rugged plain.

And yet, we don’t seem to recall those missions clearly.

Everything about the lunar program dims in the shadow cast by Apollo 11—which is understandable, because not only were human beings stepping onto another celestial body for the first time, but most of the world was in the moment, watching it happen live. We’d never had a shared experience quite like that. 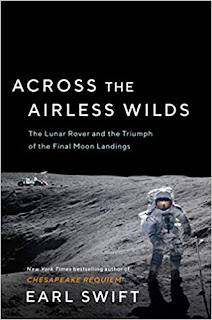 By the time the first rover flew aboard Apollo 15, we’d already been to the moon three times, and the public’s excitement had waned.

I think that was partly because those first missions didn’t make for great TV: the camera was stationary just outside the lunar module, the picture fuzzy, and the astronauts bounced around doing nothing especially stirring.

The rover’s arrival revived America’s interest in the Apollo program, at least briefly. But even so, few of us remember the names of the six astronauts who traveled in the machines.

A: I was fortunate: Though 50 years had passed, many of the players were still alive and well, and I was able to talk to them at length.

They included the engineers at Boeing and GM who conceived of the rover and built it, engineers at NASA who oversaw the program, and astronauts who tested it on Earth and actually drove it on the moon.

Some engineers left behind writing that explained their thinking. And NASA hoarded its paperwork. It ended up in the National Archives in Atlanta and Fort Worth, and in university collections in Alabama and elsewhere. I managed to go through it in the year before the pandemic shut everything down.

I was surprised by many elements of the story. First, by how long people had been thinking about driving on the moon, and working on designs for the machines that would do it, before NASA green-lighted the rover project in 1969.

The flip side of that long gestation is how little time they had to actually build it, and how difficult that proved to be. The project came close to going off the rails. It’s really a miracle it was finished in time.

Another surprise: how big a role General Motors played in the rover. The company supplied its wheels, drive trains, steering, and suspension—in essence, all the parts that moved.

Finally, just how successful and transformative the rover was. The three crews drove a total of 57 miles on the lunar surface. Fifty-seven miles. That still boggles my mind.

If you’ve driven an American car from 1969, you probably understand that it had as much in common with the horseless carriages of the 1890s as with the cars we drive today.

So imagine: the astronauts took off across the moon in what was largely a 1969 GM product, often with the intention of driving beyond sight of their one-way home.

A: The title sprang from that last idea—the image of the astronauts climbing into a 1969 electric car and trusting it to carry them across miles of the most hostile environment imaginable. Extremes of temperature. Daunting topography. Reduced gravity. And above all, a hard vacuum that, if it were to breach their suits, could kill them in seconds.

The last three Apollo missions combined the challenges and excitement of Earth’s great age of exploration with the absence of an atmosphere—imagine Shackleton’s struggles in the Antarctic ice pack, only without air.

For my money, they’re the most extreme explorations (and the craziest outdoor adventures of any kind) in human history.

Q: What do you see as the legacy of these later moon landings now that we've reached the 50th anniversary of Apollo 15?

A: I suppose that big takeaway is that, once committed to a goal, man is capable of just about anything. The team behind the rover had 17 months to design, build, and test it before it was loaded onto Apollo 15. It shouldn’t have been possible—and, in fact, it went down to the wire. But those people got it done, and it made all the difference.

Which brings up a broader legacy: that our sharpest minds are best put to use on projects to benefit mankind—and so devoted, can achieve the amazing.

A: I have a couple of projects in the works. They’re not at all like this story and very different from each other, so it’ll be fun to bring them along over the next few months.

But mostly, I’m looking forward to talking about the rover and these Apollo missions. They were our greatest adventures as a species. Our celebration of them is way overdue.