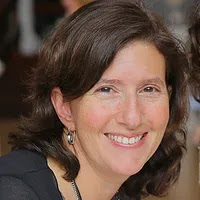 Julie Zuckerman is the author of The Book of Jeremiah, a new novel in stories. Her work has appeared in a variety of publications, including The SFWP Quarterly and The MacGuffin. She lives in Israel.

Q: How did you come up with the idea for your character Jeremiah?

A: I was in a writing class and my teacher gave us an optional prompt (he wasn’t a big believer in prompts): “Write a story about someone who is definitely not you, who does something – a hobby or a profession – you don’t know much about, but you’d like to learn more.”

I wrote a story about a black woman (definitely not me) with a landscape architecture business. I don’t know anything about landscaping, but I’m interested in gardening and thinking about how to design public spaces. I loved writing that story, both the creative exercise of getting inside my character’s head and circumstances, as well as the research on gardening.

I had such a good time with the prompt that I used it again for my next story, albeit a bit closer to home. I wrote about an 82-year-old Jewish man who takes up baking, one of his wife’s hobbies, to satisfy his sweet tooth. Definitely not me (though I am Jewish, and I do have a sweet tooth). 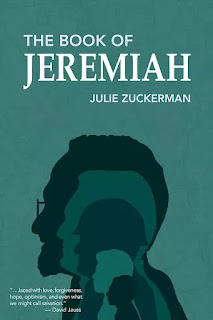 Q: The book is described as "a novel in stories"--did you always know you'd end up writing a novel?

A: After completing that first story, “MixMaster,” I decided I had to know more about my character, Jeremiah. I wanted to understand how he became the person he was at 82, cantankerous and crusty on the outside but also endearing.

I’d recently read Olive Kitteridge and I loved how each story revealed another layer or two of Olive, even those in which she is only mentioned in a line or two. So Olive Kitteridge was very much in my mind as I set out to unravel Jeremiah’s life. I wanted each story to stand on its own, but also together to be more the sum of their parts.

Q: The stories about Jeremiah's life are not in chronological order--how did you decide on the order in which they would appear in the book?

A: I played around with the structure a lot. My initial idea was to have “MixMaster” be the first story and then go in reverse chronological order. But for a variety of reasons that didn’t work; I have at least six different orders I’d been thinking of.

In 2015, I attended a writer’s conference at the Vermont College of Fine Arts; my workshop leader, Ellen Lesser, helped me strategize about the structure by thinking of the book in thirds. Ultimately, I had to balance each third with stories that take place with the younger, the middle-aged, and the older Jeremiah, as well as with the five stories told from the points of view of other characters (his mother, his brother, his daughter, his son, and his wife).

In addition, and perhaps most importantly, I’d read an excellent essay by David Jauss, “Stacking Stones,” (which appears in his craft book Alone with All That Can Happen), which talked about common threads stringing one story after the next.

A phrase or an interesting word might appear at the end of one story, and then be repeated (or inversed) at the beginning of the next. Or it might be a theme or a character or some other common thread.

For example, I have one story told from Jeremiah’s son’s point of view, and we understand they don’t have an easy relationship. In the story that follows, Molly, Jeremiah’s wife, is pregnant with their son; Jeremiah is starting a new position as an academic but he’s feeling a bit unsure of his choice, wondering if he’ll ever belong at this fictional university. Immediately afterwards, there’s a story 40 years in the future, where we see Jeremiah as a semi-retired professor at that same university.

Once I began thinking of the book in thirds, it wasn’t hard to find the threads between the individual stories.

A: What’s been most gratifying for me as a writer is to hear from readers who say they can see themselves or their family members in my characters. In one word: relatable.

There’s often so much strife and tension within families. What I’ve tried to do with Jeremiah is to show that perhaps we should try to be more forgiving, even with – or especially with – difficult family members. Though Jeremiah and his family may behave badly at times, there’s an undercurrent of acceptance and forgiveness between them. In short, love wins.

A: I took an essay writing class in January through GrubStreet, which was amazing, so I’ve got six drafts of different essays I’d like to finish. The one I’m furthest along on is an essay about a trip my son and I took last summer to Abbaye de Valloires, an abbey in the French countryside.

My father’s first cousin was hidden there during the Holocaust, and of our immediate family members in Europe at the start of the war, he was the only one to survive. Though it’s been 74 years since the end of the war, the head nurse who saved him was only recognized (posthumously) in 2016 as a Righteous Among Nations by Yad Vashem.

Aside from the essays, I have a novel draft about a mixed Jewish-Arab women’s biking group that takes place in modern Israel. I’ve been trying to get through a first complete revision of it, but it’s a struggle. A few months ago, gearing up for the publication of The Book of Jeremiah, I put the novel draft on the back burner. I hope to get back to it by the fall.

A: To anyone struggling with rejection of their stories – I’d say: try not to take it personally and keep plugging away. A few of the stories in The Book of Jeremiah, a few of my favorite stories, were rejected over 100 times. I revised and revised and kept trying new literary journals, and eventually they found good homes. I loved the stories and the characters, and I’m so glad I didn’t give up on them.

One of those stories was “A Strong Hand and an Outstretched Arm,” the first story in the book. It’s that story that kept Kevin Morgan Watson, the publisher of Press 53, interested and compelled to read on, ultimately leading to the offer of publication for the entire collection. So if you believe in your characters, keep at it!