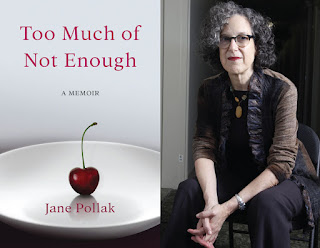 Jane Pollak is the author of the new memoir Too Much of Not Enough. A speaker and certified coach, she lives in Manhattan.

Q: Why did you decide to write this memoir, and over how long a period did you write it?

A: It occurred to me in the spring of 2014 that I had exceeded my own expectations of what would happen post-divorce (2011). At the time, I was devastated to have lost my family unit, feel betrayed and be single in my early 60’s. NOT IN MY SCRIPT.

But nobody was paying any attention to my growth and development at this stage of my life. It was completely up to me to transform my own story. I had started dating at 62, fallen in love, moved to New York City (not to be with this man, but he hung in there anyway), and took a trip around the world. Someone might be inspired by all this, I thought. I signed up for a writing class at Kripalu and began the process which has taken five years.

Q: You describe your journey through 12-step programs. How would you compare yourself at the start of that process with yourself today?

A: I started my 12-step program in 1989 and have continually attended meetings and worked towards self-acceptance. I was a sick puppy back then. I was very dependent on one relationship in particular and saved up all of my “problems” to share with this friend. If she wasn’t available I held it in, rose above, and/or sulked. Not healthy behavior.

Today, nearly 30 years later, my relationship with challenges (even a better word choice than problems) has many short-cuts—calling a fellow in the program, saying a prayer, jotting down a list of gratitudes, going to a meeting. I sometimes still sulk and hold it in, but those occasions are fewer and further between. Before recovery, I could bury my unhappiness in ice cream, gossip, and isolation. I make different choices today.

One of the best things I’ve learned is that the difference between a brown belt and a black belt in the martial arts isn’t skill level, but recovery time. How long does it take for me to get back to normal, to move out of suffering, to live in the fullness of my life? In the past, it might have taken hours, days or weeks (I was a black belt in holding a grudge), but today, the sun rarely sets on a resentment.

Q: How difficult was it to write about the experiences you describe in the memoir?

A: Very difficult. I felt as though I was reliving those painful learning experiences that made up my life. It’s still painful to read what I’ve written, though I expect that for the reader it will be informative and useful. The things my mother said and did were hurtful, and even though I have perspective and compassion for why she behaved the way she did, there are times where I just want to give my younger self a great big hug and say, “You did the best you could.”

I stayed in my marriage for a very long time even though it felt lonely there. I held marriage up as the Greatest Institution in the World and as long as I remained married, I must be okay. For the record, I was putting on a pretty good performance throughout that time. I have great kids and don’t hate my ex. I’m sad that I wasn’t able to speak up for myself or have the courage to leave earlier. I believe the timing was exactly what it had to be.

A: The reactions have been varied. I’m most proud of the fact that my English teacher ex-husband gave it a rave review. “Fantastic!” he wrote. He would have liked more credit for his parenting skills, but understood that it’s my story and respects that.

My siblings were not as enthusiastic. They consider it a “big accomplishment” but surely have their own versions to tell of how we were brought up. I doubt that my children will read it in my lifetime. I’ve given them full permission to not read it. As my ex wrote in his evaluation, “What kids wants to read about his parents sex life?”

A: I’m writing some personal essays and working on promoting this book and arranging speaking engagements. I want women (particularly) of all ages to know they have more choices than I thought I had.

A: As book people you already know this, but perhaps your subscribers (readers/listeners) don’t. There are NO shortcuts to writing a book. I had no idea it would take this long, but regret not one day of this journey. I’m deeply grateful to the people who supported me throughout these years. Even though my name is on the cover, this is not something ANYONE does alone.