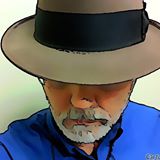 Len Boswell is the author of the Simon Grave mystery series, which includes A Grave Misunderstanding and Simon Grave and the Curious Incident of the Cat in the Daytime.

Q: How did you come up with the idea for your character Simon Grave, and did you know from the start that you'd be writing a series about him?

A: The idea for A Grave Misunderstanding came first. I thought it would be funny to write a locked-room mystery where the prime suspects were locked in the room, and not the murder victim. I needed a detective up to the task of this logic-defying situation. Someone who would have no problem ignoring logic. And thus, Simon Grave was born.

I chose “Simon” because I’ve always thought that name suggested supreme intelligence, and I chose “Grave” because I don’t think you can get more serious than that. And of course, the character Simon Grave is neither of those things, although he’d like to think he is. 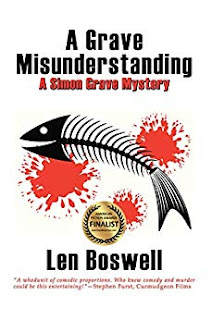 Q: How has your character evolved from the first book to the second?

A: His evolution from A Grave Misunderstanding to and through Simon Grave and the Curious Incident of the Cat in the Daytime is slight, which is intentional. Simon Grave is akin to the iconic Inspector Clouseau. As much as you want them to succeed and improve, you know that Clouseau is always going to be Clouseau and Grave is always going to be Grave.

To a point. He’s developing in small ways. I hope as the series unfolds that he will do better with women. He really doesn’t understand them or know how to approach them. He’s a bit like the town of Crab Cove, which is trying its best to cope with change, but failing miserably.

Q: You describe your books as "genre benders"--why is that?

A: The books are cozy mysteries at their core, but setting the murders in the future, in the 2050s, introduces a science fiction element. Robots and androids are everywhere, doing unexpected things, perhaps even murder. And all the books are intended to be funny, so there’s the comic element as well. 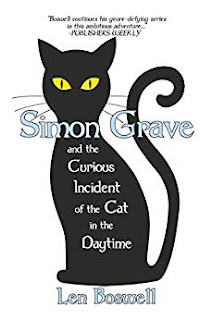 Q: Did you need to do any research to write this series?

A: Not a lot. I did some research on the fly about the ins and outs of crabbing, but nothing much beyond that. I love thinking and reading about the future, so the various inventions and cultural changes are just my ideas about how things could evolve. Again, in funny ways and for funny reasons.

A: I am a chapter or two away from completing the third Simon Grave mystery, which will be called Simon Grave and the Drone of the Basque Orvilles, an homage of sorts to Sir Arthur Conan Doyle’s The Hound of the Baskervilles. The book is scheduled for release on Feb. 6, 2020.

A: Readers can expect a new Simon Grave mystery every year. I’m already noodling on the fourth book, in fact, so be afraid, be very afraid.