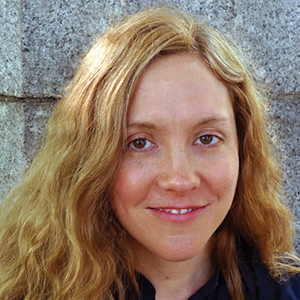 Heidi Diehl is the author of the new novel Lifelines. Her work has appeared in a variety of publications, including Colorado Review and Crazyhorse. She lives in Brooklyn.

Q: How did you come up with the idea for Lifelines, and for your character Louise?

A: Initially, I wanted to write about a time and place that fascinated me: 1970s West Germany, a time of huge social change. The decades immediately after World War II were marked by Germany’s collective silence about its crimes in the Holocaust; as the postwar generation came of age in the ‘60s and ‘70s, young people demanded public reckoning and remorse.

I was interested in personal experiences of this public shift, and I was particularly inspired by the intersection of art and politics in the early ‘70s—the ways that, for young German artists and musicians, creative experimentation intertwined with the broader cultural changes. This time period struck me as exciting, but also emotionally challenging and psychologically complex—rich material for a novel and its characters.

Louise is the novel’s protagonist, and her character developed slowly, as I explored both her creative work and her personal history. Her vantage point, as an American in Germany, offered an outsider’s lens. The book also includes chapters told from the perspectives of four other characters; I wanted the other central characters, including a German one, to weigh in, too. As both a reader and a writer, I love the prismatic quality of multiple perspectives in a work of fiction.

Q: The novel takes place in the early 1970s and in 2008. Did you write the chapters in the order in which they appear, or did you focus on one time period first and move things around later? 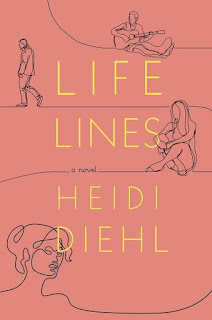 A: I knew from the beginning that Lifelines would be a nonlinear story, and I envisioned the structure as a conversation between the past and present chapters. I tend to work on things out of order—my mind jumps around during the drafting process, whether I’m writing something short-form or long-form.

With this book, I found myself working on a nonlinear structure in a nonlinear way, which was creatively generative and also sometimes maddening. I kept an outline going as I wrote, just to keep track of what was happening in the various time periods. When I was revising, though, I usually did focus on one period for weeks at a time, to get into the language and details of the time and place, and into the headspace of the character.

A: The novel originally had another title, but it was clunky and hard to understand without reading the book first, so my editor wisely suggested we change it.

In searching for a new title, I went back to some of the source material that had initially inspired my thinking about the book—the art and music from West Germany and the U.S. in the 1970s. I spent a Sunday afternoon poring over books, and when I was leaving for work on Monday morning, I remembered that I’d pulled a Mary Heilmann book from the shelf, but hadn’t looked at it.

While drafting, I’d been compelled by Heilmann’s abstract paintings and their intense use of color, as well as her personal history as a painter on the West Coast. With my coat on, clutching my keys, I leafed through to Heilmann’s painting "Lifeline." That felt serendipitous. Lines have so much resonance in the novel.

Louise’s second husband, Richard, is an urban planner who studies desire lines, the informal paths people create as alternatives to the official paved way, like a dirt trail that cuts across a park’s lawn. Desire lines are a central image for the book’s characters and the ways they follow their passions and sometimes stumble through life’s complications, forging their own paths.

And Louise has spent decades working on an ongoing sculpture that uses wooden tiles to trace a line through grass; she is continually adding to the line as the wood pieces erode over time. So "Lifelines" felt like the perfect title.

A: To me, Lifelines is so much about the ways that we wrestle with difficult histories and circumstances, both public and personal. For the book’s characters, creative expression is central to that search for understanding and agency.

Through the course of writing and editing this book, the political landscape in the U.S. changed—the 2016 election and its aftermath, the alarming ways that hateful rhetoric and policies have claimed a louder voice in our government.

I’ve continued to be inspired by the research I did while writing Lifelines, by the ways that the German postwar generation used creative means to respond to problematic politics and advocate for change. So I hope that readers find that the book is pertinent to our current moment, even though it’s essentially a historical novel, and perhaps find some inspiration, too.

A: I’m working on a new novel about a coastal community dealing with the impact of sea-level rise; it’s set entirely in contemporary time, covering a much shorter span of time than Lifelines.

And though this book’s structure feels different from the structure of Lifelines (at least at this early stage of drafting!) I’m finding that some of the same fascinations are coming up—the complicated bonds in families, and the ways we measure and feel the passage of time. If Lifelines was about grappling with the past, this new project seems to be about grappling with the future.

A: Thanks to you, Deborah, and to readers! My website includes a discussion guide with questions for book groups, as well as more information about Lifelines.