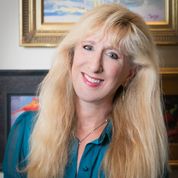 Sarah Z. Sleeper is the author of the new novel Gaijin. Her work has appeared in a variety of publications, including The Shanghai Literary Review and A Year in Ink. A former journalist, she is based in California.

Q: You write that Gaijin was "loosely based" on the years you spent in Japan. How did your own experiences compare with those of your character Lucy?

A: Lucy's experiences in Japan sprang from my own, but not precisely. She is more naive than I was when I lived there and while I witnessed protests and conflict, I only read about things like "upskirting." That never happened to me.

And while I was aware of a rash of crimes committed by American servicemen, I never sat through a rape trial as a reporter the way Lucy does. I had to research how Japanese courts are run, including their physical set up, which is so different than U.S. courts.

It's worth noting that the magazine I worked for was a bit fluffy, with content intended to enhance the Okinawan-American relationship. Lucy's newspaper covers hate crimes and other hard news.

In addition to the difficulties she faces, Lucy also has lovely interactions and cultural exchanges and I was fortunate enough to have had those too. In fact, I had many more positive moments than Lucy does.

For instance, in thanks for a story I wrote about him, a talented quadriplegic artist graced me with a painting of my cat (which I still have and cherish). And I was invited to local community events such as dragon boat races, where I was treated as a welcome and equal participant. 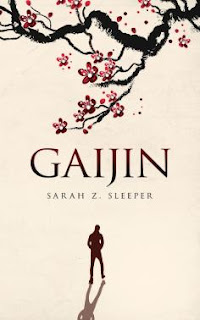 A key point is that Lucy's story takes place in a few months in Japan, whereas I lived there for four years. By the time we exit Gaijin, she's just on the cusp of embracing her life there. In my real life I had more time to do more things and gain perspective.

A: Gaijin is an interesting Japanese word in that it has a negative connotation--unwelcome foreigner--but is not exactly a slur. To me, it perfectly fit the story and the protagonist. Lucy is in what she believes is a gracious country, yet she often feels unwanted and sometimes threatened.

As well, the street protests are akin to Japan telling the American military that it is a gaijin. And of course Lucy's love interest, Owen Ota, feels like a gaijin in his own family. So, although I considered other book titles, Gaijin seemed right to me on many levels.

It's worth noting that a minor character, Lester, talks about the time a Japanese teen tried to kick him off his bike while shouting "Gaijin!" at him.

That did happen to me and was an inciting incident for the novel. I was riding my bike up a busy road and a teenager on the sidewalk yelled at me and tried to kick me over. I was stunned and I wondered why he had such animosity toward me, someone he didn't know.

Over time I came to understand more about the tension between Japanese and Americans. And though I wasn't part of the U.S. military, my blonde hair definitely called attention to me as "other."

A: No, I didn't know the ending at first, but discovered it as I went along. I tend to write from the middle out. First, I write key characters and dramatic scenes. Then I construct the rest of the story around those.

A: Oh! That's a hard question. I suppose I want readers to be moved by the story and have empathy for Lucy and the other characters. And if readers learn a few things about another culture that would be wonderful too.

I definitely don't write stories to teach people lessons. But I do hope my stories reveal poignant emotional truths and break readers' hearts, at least a little.

A: I'm finding myself drawn back to a group of 12 short stories that I wrote six or seven years ago. They need work, but I'd like to improve them and publish them as a book. Their subjects are all over the map, from an obsessed tennis player, to an ethically chalIenged newlywed, to an alcoholic father.

I've also started a new novel and am about three chapters in. I can't tell you what it's about, because I learned while writing Gaijin that it's better not to share until the work is complete.

A: I'd like people to know about the amazing art form that is called "ekphrasis." It's poetry inspired by visual art. A well-known example of an ekphrastic poem is the song "Vincent" by Don McLean. The song was inspired by Vincent van Gogh's painting, "The Starry Night," and became a beloved ballad of the 1970s. (There are many other well-known examples.)

I wrote a collection of ekphrastic poetry myself that you can see on my website, and I teach a workshop on the form. I think it's important and enriching to experience different art forms!