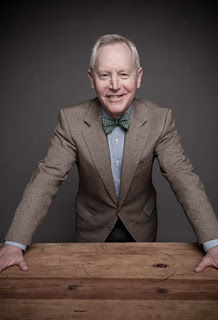 Willard Spiegelman is the author of the new book Senior Moments: Looking Back, Looking Ahead. His other books include Seven Pleasures and How Poets See the World. He is a regular contributor to The Wall Street Journal's Leisure & Arts pages, and was editor in chief of Southwest Review. He is the Hughes Professor of English at Southern Methodist University in Dallas.

Q: Why did you decide to write Senior Moments, and how would you describe your response to the aging process?

A: I did not decide to write a book called Senior Moments. I was writing various essays, which were published in literary quarterlies. Each was an individual foray.

As with my last book, Seven Pleasures, I woke up and thought that perhaps the essays I’d written could be expanded, supplemented, and turned into something bigger. That’s how each of these books saw the light of day.

In the case of what became, eventually, Senior Moments, I had written versions of the chapters on books, art, nostalgia, and quiet (originally called “Some Words on Silence”). I added to them.

As the whole was being licked into shape, I realized that it constituted a memoir of sorts. It turned into a series of eight essays that—like any person’s life—contains certain leitmotifs woven throughout it. Those are the main strands of both my life and my book.

How do I respond to the aging process? What choices does anyone have? One accepts it. 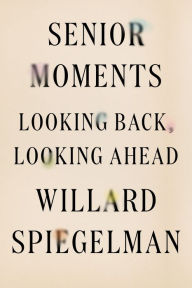 A: I write that my earliest memories are all engaged with language, which became (see above) a leitmotif in my own life. Listening, talking, reading, and writing: I was a phonophiliac (did I just invent that word?), in love with language.

As one ages, one becomes as grateful for moments of silence, or at least quiet, as for the stimulation provided by words. One accepts the wisdom embodied in silence. Language can do only so much.

Remember what Eliza Doolittle says in My Fair Lady? “Words, words, I’m so sick of words.” Everyone has moments like this.

Q: You write, "Of one's plans and aspirations, one begins to eliminate items from the lists one made in youth." What are some of the things you've eliminated and what are some that remain on the list?

A: I’ve eliminated the desire to travel to certain places, like China. Having said that, I would add that if anyone offered me an invitation to go anyplace, not at my own expense of course, I’d accept it gladly. And any place where one has friends is worthy of a visit.

I have also eliminated the possibility of becoming completely fluent in other languages, having to content myself with half-hearted, enthusiastic forays into schoolboy French, Italian, and German.

I’ve just done something I’ve always wanted to do. I visited Greece. I didn’t want to die without seeing the Parthenon.

The great Edith Hamilton had to wait until she was 90 to go to Athens. I didn’t want to wait that long. Athens made her an honorary citizen. They accorded me no such honor. But I saw the Parthenon.

Frankly, I much preferred the astonishing new Acropolis Museum. It was air-conditioned. You could see the caryatids up close. So much nicer than the ruins outside. I’d make a terrible archaeologist. I have no desire to clamber through ruins. 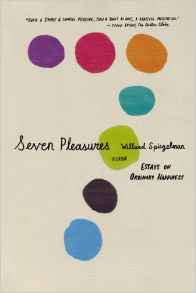 And I was reminded of something that Samuel Johnson once wisely observed, namely that there are a few things worth seeing but nothing is worth going to see.

Staying home has a lot to recommend it, but travel does as well. It’s good to break habit every so often and to feel the discomforts as well as the pleasures of being elsewhere.

George Bernard Shaw said he disliked feeling at home when he was abroad. I understand that sentiment completely. One is grateful to come back, of course.

Q: The book begins with three quotes, from Alexander Herzen, Howard Nemerov, and Louise Gluck. Why did you choose those quotations, and do you see their messages as similar to one another?

A: It’s an exaggeration to say I chose those quotations. Epigraphs, like introductions, often come last. I knew the Nemerov poem about preparing for death, and as I was writing I read Louise Gluck’s latest book, which contained the line about going forward and going back, and it jumped out at me.

The Herzen lines appeared somewhere, in a book review I think, that I read in The New York Review of Books.

I don’t quite believe in “messages.” I believe in suggestions, hints, and stimulating observations.

Q: What has been the response to the book so far?

So far, preliminary reviews have been encouraging. The Kirkus book service labeled my writing "lucid and propulsive, opening portals to heightened enjoyment of the time we have." This is nice, although I'm not sure whether something can be both lucid and propulsive.

Publishers Weekly praised my "casual engaging style." I take this to mean that my book was fun to read.

Most amusingly, a review in the Charleston (SC) Post and Courier, began: "Willard Spiegelman writes essays like Ferran Adrian approached 'molecular' gastronomy, with conscious, understated artistry." So there it is: good writing but without the foam?

And, this just in: yesterday my agent said that a subsidiary publisher wants to do a LARGE PRINT edition of the book. I'm gratified to think that it will make its way into wrinkled hands and before dimming eyes everywhere. 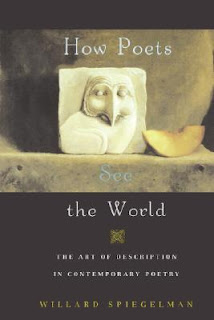 The funny thing is that I never intended this book to be of interest only to senior citizens. It's about my life, my observations, and my ideas, but these should delight and instruct readers of all shapes, sizes, and ages.

A: A long essay on the collected poetry of Adrienne Rich. That’s more than 60 years and 1,100 pages of poems. That’s a lot.

I'm reading the proofs of a selection of the art pieces I've done for The Wall Street Journal over the course of the past 25 years. The title: If You See Something, Say Something.

Next up: Al Jolson.