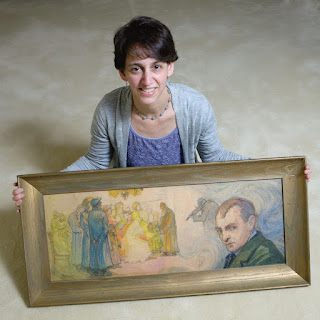 Elizabeth Rynecki is the author of the new book Chasing Portraits: A Great-Granddaughter's Quest for Her Lost Art Legacy. It focuses on her great-grandfather, the artist Moshe Rynecki. She also is working on a documentary film on the same subject. She is based in Oakland, California.

Q: You write, "In 1999 I built a website dedicated to sharing my great-grandfather's art." How much did you know about his art to begin with, and how did your original project turn into this book and a companion documentary film?

A: I grew up with a lot of my great-grandfather’s paintings hanging in both my parents’ and grandparents’ homes. It was always around me, in the background even if I wasn’t really paying attention.

I understood from an early age it was the work of my great-grandfather, Moshe Rynecki, who perished in the Holocaust, but that’s about all I knew--my parents and grandparents didn’t often talk about the war, and even less about what came before.

It wasn’t until I read my Grandpa George’s memoir (discovered in 1992, after his funeral), that I learned much about Moshe himself. Even then, I didn’t really get a good perspective on his life and work until I began digging for more information.

In late 1998 my Dad proposed we build a website to showcase my great-grandfather’s art. His thinking was this: we have the art in our home, very few people see it every year, and putting it online would make it more accessible to people around the world.

In retrospect, it was a pretty novel idea. While most museums had something of an online presence in the late ‘90s, finding private collectors and their collections online was exceedingly rare.

It was hugely serendipitous; as people saw the site, they started contacting me and telling me about paintings they had or had seen. It became clear that many of Moshe’s works had survived the war.

Several years later, as YouTube started to become a household name, making a video for our website seemed like a good idea. But I didn’t know what to put into a video nor how to actually make a short film.

I sought advice from some documentary filmmakers that I knew because our sons went to the same preschool. When I described my story and ambitions they encouraged me to interview my Dad so I’d have “footage in the can.”

That turned out to be excellent advice! The footage was used to create an initial nine-minute trailer for the film project, a proof-of-concept piece I used to gain 501(c)3 non-profit status with the National Center for Jewish Film, and used to generate early funding for the film. 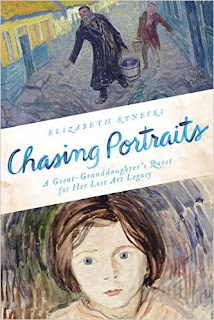 The idea for the book came about because raising money for the documentary proved far more difficult than I ever imagined. While I wasn’t ready to just shelve the documentary, Dad was getting older and historical ties to the past seemed to be fading. I wanted to capture those moments and connections before they were gone.

Writing a book seemed like a good solution – I could record the stories and fragments I knew and I didn’t need a whole lot of money for travel, film crews, and equipment.

Given the book’s publication date and the fact that the documentary is still in post-production editing means people will probably say the book came first.

But from where I stand, the two will always be inseparable. Filming informed my writing and as I worked through my emotions and perspectives on the written page I began to realize what was important to capture in filmic moments. They really are companion pieces.

A: I wish I could say I went to the library, checked out an enormous stack of books, read, and then sat down to write. It really was never that simple.

My research journey took well over a decade of meandering, collecting fragments, and finally having enough pieces to weave it all together.

I owe a great debt of gratitude to my grandfather for saving literally everything; my research got a tremendous head start from the information gleaned from boxes of family letters, official war and post-war documents, photographs, and newspaper clippings. His memoir was also invaluable.

I hand coded the first Moshe Rynecki: Portrait of a Life in Art website which gave me a much deeper appreciation for Moshe’s art itself.

I also read academic articles and art catalogs, and searched genealogical indexes looking for clues and mentions of my great-grandfather and those who might have influenced his life.

Although I actively researched many elements of the book, particularly the broader sweep of history and its impacts on my great-grandfather’s life, a lot of the really critical elements arrived serendipitously in the form of unexpected emails, social media connections, or in-person conversations after I gave talks.

There were really two big surprises, and the first is just that so much of his work survived the devastation of Warsaw. Growing up, my family thought we had the only surviving paintings, and now there is evidence that close to a hundred additional paintings survived.

Second, that although my great-grandfather was not famous, he was a reasonably well known artist in Warsaw in the interwar years. His work was shown in exhibitions and talked about in the press.

I always felt his work was beautiful and that we were lucky to have it, but I am deeply grateful to learn both about additional art that survived the war, and how Moshe’s work has impacted others.

Q: How did you see your roles as great-granddaughter and author as you wrote the book?

A: The relationship between these roles is made more complicated by the structure of the book. The first part of the book is narrative non-fiction about my great-grandfather’s obsession with art and my family’s wartime story.

To write the first few chapters of the book I drew upon Grandpa George’s memoir, my understanding of that period in history, and others’ recollections.

As an author, the narrative non-fiction required that I stick to the facts, with an emphasis on telling the story of the art, and bringing history to life.

So as an author, I felt that it was very important in the latter section to shed a lot of that narrative distance and really focus on my story and how I felt. Frankly, that was a lot more difficult for me, and sharing my personal journey often left me feeling vulnerable.

Ultimately I hope my honesty and forthrightness on the page makes for a compelling read.

A: I first needed a title for the short trailer we made in 2009. I ultimately went with “Chasing Portraits,” because I wanted to emphasize my role in pursuit of information and answers that always felt just out of reach.

As a genealogist, art historian, and detective, I often felt like I was running around trying to grab on to elusive bits of facts and history. Sometimes, people who knew the answers to my questions were already gone. Sometimes, those who could help me weren’t interested in extending a helping hand.

The subtitle, “A Great-Granddaughter’s Quest for Her Lost Art Legacy,” is meant to acknowledge that my goal was not to re-possess my great-grandfather’s paintings, but to rescue his art legacy from obscurity.

Many people searching for art looted from their families during the Second World War are claimants seeking the return of the art. Although of course I would be absolutely delighted to accept Rynecki art from others, my quest was not as a claimant, but as a historian.

The goal is to open doors rather than to risk having them closed.

A: The documentary film is in post-production editing. I’m working with the editor, reviewing well over a hundred hours of footage, picking selects (the most important moments), helping assemble a narrative arc, and trying to move the project towards a rough cut.

Next on my to-do list is to write grant proposals, asking for the funding I need to finish the film. Assuming that goes well, I will start submitting the film to various Jewish film festivals and festivals with a documentary film category.

I hope to eventually have the film picked up by a distributor, made viewable on public television, and made accessible to educators.

A: The project can be found online at www.ChasingPortraits.org. The site contains links to an online art gallery featuring my great-grandfather’s paintings, my blog, educational resources, an annotated bibliography, news coverage, and project related videos.