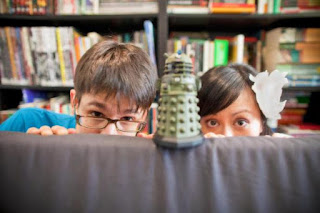 A.J. Low (the husband-and-wife writing team of Adan Jimenez and Felicia Low-Jimenez) are the authors of the children's books Sherlock Sam and the Missing Heirloom in Katong and Sherlock Sam and the Ghostly Moans in Fort Canning, the first two books in a series now published in the United States. The authors are based in Singapore.

Q: How did you come up with the idea for Sherlock Sam, and did you know from the beginning that it would be a series?

A: The idea for a chubby boy detective series set in Singapore actually came from our Singaporean publisher, Epigram Books. They held a sort of open call for writers to pitch ideas on this kind of series, and we jumped at the chance.

When they ultimately chose us to write the books, we ended up infusing the Sherlock character with a lot of our own characteristics: he loves comics, he loves maths and science, and he loves to eat.

Then we created a bunch of other characters to round out the Supper Club because, unlike the original Sherlock, we wanted our Sherlock to have a "Scooby Gang" to work with. 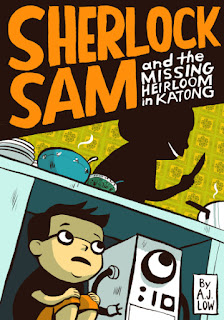 Q: Are you both Sherlock Holmes fans, and do you have a favorite Holmes adventure?

A: Yes, we both love Sherlock Holmes, and read many of the stories as kids and we continue to follow his adventures as adults as well (we love both the BBC series as well as the American series with Lucy Liu).

Adan's favorite adventure is "The Adventure of the Greek Interpreter", which introduces Mycroft Holmes, Sherlock's brother. Felicia doesn't have a favorite story, but she loves the language of the original series (she's a big fan of anything Victorian) and is also a huge fan of the Laurie R. King series featuring Mary Russell.

Q: Many of the events in the books take place in specific locations in Singapore. What do you think readers both in and outside of Singapore will learn?

A: That there's lots of cool stuff in Singapore! We do a lot of research before we start writing about a specific neighborhood, and we're always discovering new and awesome things in those neighborhoods.

Singapore is a very small country, and many people (even those of us who live here) might think we've seen it all and that there's nothing new to discover because of our size.

But it turns out that's not true. Even people who have lived in Singapore their entire lives can discover cool new things about it, and they often make it into our books. 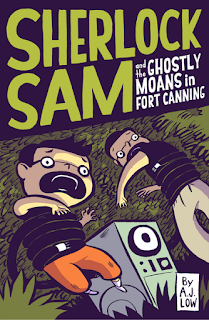 Also, as Singapore is a multi-racial, very diverse country, we have some of the best food in the world and all Singaporeans take food very seriously (which is why Sherlock Sam does as well). We feel anyone who spends time in Singapore should spend 2-3 days in this country doing nothing but eating.

However, even though our stories are set in Singapore, they are still basically the story of a very curious boy and his friends going on adventures, getting in trouble, and having fun.

We believe that these are stories that are universal and children, regardless of where in the world they live, will be able to identify with. We hope so anyway!

Q: How do the two of you collaborate as you write, and how closely do you work with illustrator Andrew Tan?

A: We have to plan the books very closely as there are two of us writing, and we can't just start writing willy nilly. That way lies madness and confusion.

So we work together to plan out the story and organize it in chapter breakdowns, so we both know what's going to happen in each chapter (including important clues and jokes).

Once we're both good on the outline, we'll tag team on the actual writing. Felicia usually starts first, then Adan tags in, then back to Felicia, then back to Adan, so on and so forth until the book is done.

We used to tag after every chapter, but we realized that tends to break our "writing flow," so now we write 2-3 chapters at a time before tagging out.

We work with Andrew (aka drewscape) quite closely, as well. We meet up before he starts any art to discuss what exactly we want him to draw. He reads the books before our meetings, so he has ideas on what to draw as well.

He'll start sketching during the meeting, to make sure we're all happy with the basic composition and positioning, then sends us updates as he gets further along in his process. He's a fantastic artist and we're super lucky to have him aboard.

He's a also a geek and a comic fan and that allows him to add nerdy stuff into his illustrations (which we love) without us prompting him either. We love that! 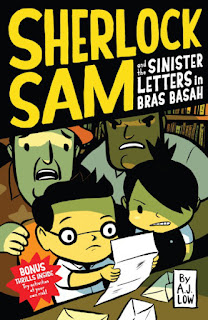 Q: What’s next for Sherlock Sam?

A: He's growing taller for sure. Haha.

We have plans for the next three books in the series (a collection of short stories that should be out in February 2017 in Singapore and then books 12 and 13), and are looking to go beyond that too.

A: We'll be in the U.S. (primarily the West Coast) in October 2016 visiting schools and bookstores! The exact dates and times aren't fixed yet but we'll definitely post them up on our social media pages: